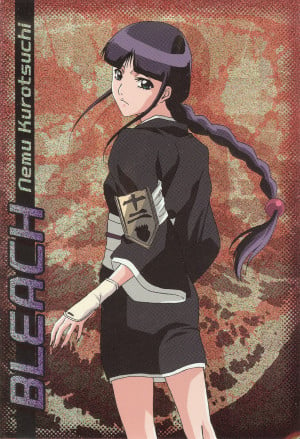 Nemu, formerly known as Nanagou Nemuri (眠七號, Sleeping Number 7), was the former lieutenant of the 12th Division of the Gotei 13, serving under Captain Mayuri Kurotsuchi. Slender and youthful, Nemu is a well-endowed woman with green eyes. Her black hair is pulled back into a long braid, with slightly parted bangs. Her uniform consists of a short black kimono, which extends to mid-thigh, with a white nagajuban underneath. The sleeves of her kimono are not as wide as those worn by most Shinigami, and the upper parts of the sleeves are puffed. She wears a traditional wide white obi, fastened with a red cord. On her left sleeve is her lieutenant's armband. She wears white gloves, which only cover the back of her hands and wrists, and a dark red choker. As a child, Nemu had unkempt hair and wore a lab coat. Because she was abused and mistreated in every possible way by her "father/creator", Mayuri, Nemu is a very shy, withdrawn, and introverted individual, preferring to stay silent in her captain's presence. Her expression is almost always melancholic, and it is rare to see her smile or show any real joy in her distinctive green eyes. Despite Mayuri's seeming lack of care for her existence, she is very loyal to him, willing to badly injure herself just to give him an advantage in battle. Unlike her "father", however, she seems to have compassion for others, saving Uryū Ishida's life as thanks for not killing Mayuri. Being the daughter of Mayuri, they share several similar traits. One such trait is their food preference. Nemu, just like her father, likes pike fish and dislikes onion. They share an interest in Human experimentation and their main free-time activity, which is reading every single character published in Seireitei Communication. Nemu is the artificially created "daughter" of Mayuri Kurotsuchi. He used a combination of Gigai and Gikon technologies to bring her into existence.