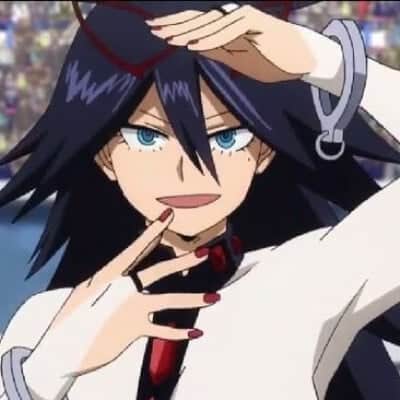 Nemuri Kayama, also known as the R-Rated Hero: Midnight, was a Pro Hero and faculty member at U.A. High School, who taught Modern Hero Art History. Nemuri was a tall, curvaceous woman with sky blue eyes, which tilted downwards in the center; framed by a set of rather long eyelashes. She had long thick spiky dark purple hair, which was made up of layers of varying lengths, the longest ones reaching down below her waist. Her chin-length bangs were split into three sections; two swept to the sides and one over her face, going diagonally down to the left between her eyes. She also had a small beauty mark below her left eye, as well as red-painted nails. Her hero costume was very similar to one of a traditional dominatrix. She wore a breastless, black leather leotard—similar in style to a corset—over a thin, skin-tight, white bodysuit (flesh-colored in the manga), which accentuated her voluptuous figure. The center strip of her leotard was embellished with red gemstone-like accessories in a vertical pattern, extending from her collar to her midriff. She also wore translucent, black, thigh-high garter stockings, which were attached to a burgundy utility belt decorated with gold studs around her hips, a matching pentagonal buckle in its center, and black knee-boots. She had a small red mask outlining her eyes, and a handcuff on each wrist. She was often seen carrying a flogger-style whip. The white bodysuit was made of thin material that is easily rippable so she could more easily use her Quirk. Nemuri had stated in an interview that she was trying different materials to find out what works while adhering to costume regulations. During her years at U.A., Nemuri's hair was much shorter, having reached down to her chin. Her original costume was also much more revealing. Her breasts were censored by black protective plates and she wore a dog collar, along with only undergarments, which were covered with a utility belt that held her whip. She was otherwise completely bare aside for an unbuttoned, high-collared trench coat. She also had large angular shades, different from the mask she wears now. Nemuri was a very playful and flirtatious person with an unpredictably serious and temperamental side to her. She got angry whenever someone interrupted her or when they insulted her, and, when it came to insults, she was especially sensitive about her age. Nemuri had no shame for dressing or acting sexually in front of young students and appeared to act on whims most of the time. When she accepted Mashirao Ojiro and Nirengeki Shoda's request to resign from the tournament, she commented that their naivety "turned her on". She was also very excited to see the chivalry displayed by Eijiro Kirishima during the tournament when he shook Tetsutetsu Tetsutetsu's hand. Her love of "youth" was also a reason why she got angry when someone mentioned her age or called her old. When Class 1-A needed to decide on code names for their internship, Nemuri displayed her willingness to help her students by making sure they chose names that would represent themselves well. During the First Term Final Exams, Nemuri admitted to Minoru Mineta that she has a sadistic side and enjoys dominating others. She can be impressed with those who resort to genius plans, as she was amazed by Minoru using tactical thinking to defeat her by luring her out and leaving her trapped in place before passing the gate. Despite her flirtatious personality, Nemuri was intelligent, perceptive, and articulate. For instance, in an interview, she logically explained the reasoning behind some heroes having revealing costumes to make full use of their Quirks, thus leading to "sexy" costumes, and how her previous "scandalous" costumes single-handedly led to the institution of hero costume regulations. However, in response, Mt. Lady commented that Nemuri simply likes dressing the way she does for attention, and given her frequent posing while on TV or addressing the media, this in itself was quite likely. As shown in the Vigilantes spin-off series, Nemuri was capable of putting her lascivious hero persona to one side when off duty. As a civilian, she was perfectly capable of presenting herself as an ordinary woman and displayed a caring, thoughtful, and even motherly side towards others. This was shown with her friendship and care towards Pop☆Step and her empathizing with Hina, despite the former's vigilantism and the latter's wrongdoings. While acting bawdy and coming off as a hero who enjoyed her fame derived from her beauty and sex appeal, Nemuri was willing to fight and put her life on the front lines during the Paranormal Liberation War, demonstrating her true bravery and heroism. Similar to All Might and Shota Aizawa, she also believed in her students and their capabilities, acknowledging that all of them have what it takes to become great heroes in the future. Near the end of her life, Nemuri informed Momo Yaoyorozu that classes 1-A and 1-B must sedate Gigantomachia if he could not be stopped by force alone, encouraging her students to stop the behemoth's destruction, even if them doing so broke the law, and trusted them to make the right call.