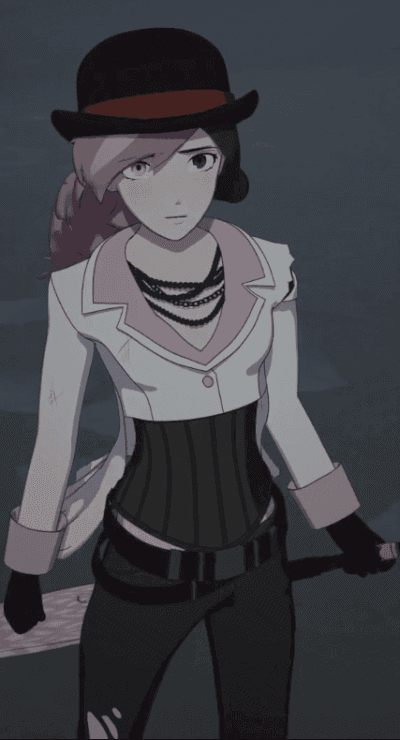 Neopolitan is an antagonist as well as an associate of Cinder Fall and formerly Roman Torchwick in RWBY. Her weapon of choice is an umbrella with a concealed blade. She first appeared in "Painting the Town...". Neo, themed after Neapolitan ice cream, has the appropriate trio of colors in her hair and on her outfit. While sometimes altered via illusion for disguise, her hair color is typically half pink and half brown, with white streaks on the pink side. Neo's natural eye color changes between brown, pale pink and white, and they can alternate coloration in differing combinations, with this ability apparently being entirely under her control. Because of this, she often appears to temporarily have a condition known as heterochromia iridum, where the eyes of a subject have two different colors. In her case, it is complete heterochromia, where one iris in its entirety is a different color from the other. In Volume 3, she is seen wearing green eyeshadow, starting with her paramedic disguise. Neo exhibits a stern, business-like demeanor at the White Fang meeting. However, when intervening to help Roman following his defeat, she wears a self-assured smile and politely bows to Team RWBY, showing confidence on the battlefield. Neo's confidence was also seen in her fight with Yang, smiling throughout the entire fight, as well as silently mocking and taunting her. She displayed confidence before the fight, not only against Yang, but also Weiss Schnee and Blake Belladonna, as, despite being outnumbered three to one, she revealed herself instantly to the trio and was prepared to fight them. Neo is also shown to have a sadistic side, as seen in her smile as she prepared to stab Yang. However, she does seem to exhibit fear and hesitance when she knows she is outmatched, fleeing if her opponent proves to be as such. This can be seen when Raven Branwen appears and engages her on the White Fang cargo train. Neo was also seen to have a vengeful side by her attempt to kill Cinder in "The Coming Storm" for her part in Roman's death only stopping when Cinder revealed her Maiden power.