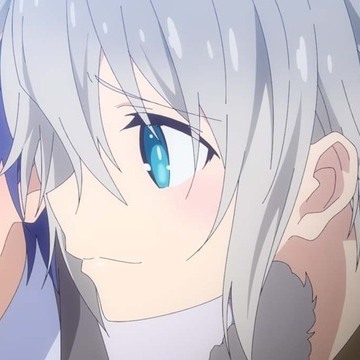 Nia Honjo is the ninth Spirit to appear in the series. Nia has short, ash gray hair and icy blue eyes. Nia's Astral Dress takes on the appearance similar to that of a nun. Her Astral Dress is an ink-colored semi-transparent fabric that completely displays her figure. The collar of her dress takes on the shape of a pen tip, and the middle part of her Astral Dress is patterned as a manga panel, both of which referencing her job as a manga artist. She wears long black laced boots and a black veil that is attached to a pen and a feather duster. There is also a golden cross-connected to a beaded rope, surrounding the waist of the dress. When she is not using her Astral Dress, she wears a pair of dark red square-framed glasses. Her casual outfits tend to be relatively unfeminine, only wearing dresses on special occasions. Her three sizes are B76/W59/H80. Nia has a very energetic personality that allows her to get along with everyone. It also helped her become familiar with the society very quickly, along with the aid of her Angel. This kind of personality was also shown throughout her first date with Shido, where she maintained a playful attitude while teasing him. However, thanks to her powers, Nia began to lose her ability to open up to humans. Her omniscient Angel ended up backfiring on her after she became curious about her origins. The feeling of distrust started sitting in her heart after she had learned about her past self. Nia also started checking each person she knew and became disgusted with humans after discovering the dark side of humanity through <Rasiel>. It ultimately made her distance herself from her acquaintances and ended up making her alone. Since she could not live without coming into contact with anyone, Nia decided to put on a mask and treated everyone as if they were NPCs in a game. Afterward, she began to immerse herself in the 2D world, since it was the only thing she could open her heart to without fear of disappointment. The characters in that world were very straightforward yet sophisticated at the same time. Best of all, she couldn’t detect any malice from them from using <Rasiel>, and they could never betray her. However, her interactions with Shido proved that she still had hope that she could meet someone whom she can open her heart to, something that Westcott took advantage of substantially. Nia also has a significant hate towards spoilers. She does not like spoiling something to someone and also hates being spoiled. However, she will disregard this if she is very angry about certain things. During her conversation with Kurumi, Nia also remarked that she does not want to use her powers to start a conflict and would not reveal any dangerous information, even if the other party wanted it from her. She is also very passionate about her Otaku hobbies, becoming furious after she found out Shido was acting out of character while cosplaying as her favorite character, Tokiya, to make her fall for him. Due to this hobby, she often makes up nicknames for the other Spirits. She is a heavy drinker and fills her kitchen with alcohol, which is otherwise empty because she exclusively eats instant food or take-out unless Shido is available to cook.