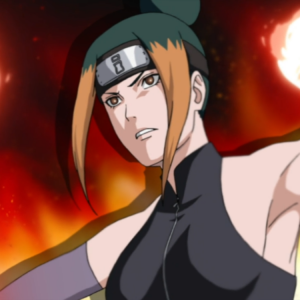 Pakura (パクラ, Pakura) was a famed Sunagakure kunoichi during her lifetime. Pakura was Maki's teacher and would regularly train with her. During her lifetime, Pakura, who was also known as the Hero of Sunagakure, was considered a part of negotiations with Kirigakure, according to the village higher ups. She took her last breath while cursing her village and shinobi.[1] In the anime, Pakura's background is further explained. Pakura was sent on a mission to stop Iwagakure's plans during their feud with Suna. She successfully accomplished the mission and was hailed as a hero by the village. Some time later, Pakura was sent on another mission to Kirigakure, to act as an envoy, but she was betrayed and killed by the ambush they set. After her death, Rasa and the seniors pinned the blame on Iwagakure for her death. Pakura seems to have a moral code of sorts, shown when she was surprised that she was going to fight what she deemed "children".[3] In the anime, it is shown that she is resentful towards both Suna and Kiri for the treachery that led to her death. However, after seeing Maki and the resolve of Maki's comrades, Pakura decides to "give the children a chance to change the future" before her personality was wiped out again. While alive, she believed that loyalty for friends, family and village makes a shinobi strong. Pakura was a fairly tall kunoichi. She was fair-skinned with pupiless brown eyes. She had green hair that she tied in a bun on top of her head with a hair needle running through it and one short and long strands of hair with orange tips framing each side of her face. Her typical attire consists of a sleeveless, backless top and short tight pants, with two lapels on the front and the back. She wears an obi around her waist, as well as purple arm-warmers which extend up to her shoulders, and has bandages around her tights and ankles. Like all reincarnated shinobi, the only changes in Pakura's appearance were that of grey eye sclerae. Birthdate : April 9