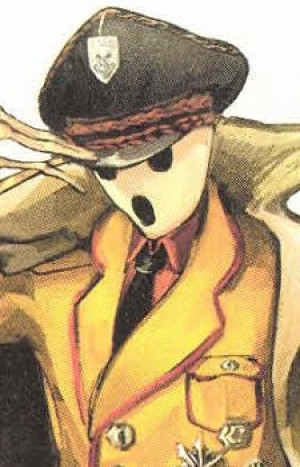 Pandora's Actor is an Area Guardian of the Treasury and the financial manager of Nazarick. He is responsible for the upkeep of Nazarick and Ainz Ooal Gown. He was created by Momonga himself. Pandora's Actor's hat bears the crest of Ainz Ooal Gown, while the uniform he wears is very similar to the uniforms used by Neo-Nazi elite guards during the Euro-Arcology Wars 20 years ago. While Pandora's Actor is dressed in a yellow Neo-Nazi-esque uniform, he is just an egghead with no distinct facial feature except the three holes protruding on his face. According to Momonga's original design for him, Pandora's Actor is supposed to be the combination of everything that his creator thought was cool, with exaggerated gestures and body language. Pandora's Actor is an egghead whose behavior is always over-exaggerated, which Ainz sees as humiliating to his own past. However, while Pandora's Actor is over the top, he can also be extremely practical. In addition to that, Pandora's Actor is outspoken and self-reflective enough about how his actions as his master's body double may hurt the reputation of Ainz in the face of his foes. He admits to going overboard with his acting performance and is critical of his own transgression for it. When fighting Riku Aganeia, who has mysterious powers unknown to him, he possesses a similar way of thinking like his creator, including how to carefully approach the battle against it in a way that suits Ainz's objective. Even when Pandora's Actor is in a death battle for his life, the level-headed shape-shifter remains cool, calm, and collected, despite feeling trapped by the enemy's power. It gets to the point that he is not the least bit afraid of carrying his experiment out in the open fearlessly while the battle is still happening. Pandora's Actor will even put up a facade, maintaining it calculatingly for however long he needs to get the enemy's reaction. He is very diligent and attentive to details while carrying out his role as a Doppelgänger under Ainz's order, paying close attention to not only what his enemy say and do, but his surroundings as well. Unlike the other NPCs who willingly obey Ainz's every order without question, Pandora's Actor is an exception. He is willing to question his creator's order if needed, clarifying his duties and giving suggestions whenever possible. Thus, despite his personality, he can be the perfect executioner of all his creator's tasks without misunderstanding his intentions. In that regard, he is able to deeply grasp and understand the extent of his creator's ways and motivation of achieving victory without seeing one's defeat as a loss but a win. Due to his flexible ability as a Doppelgänger, he is a shrewd person in every way possible, such as adopting the duties in and out of Nazarick. Like the other inhabitants of Nazarick, Pandora's Actor is loyal to the Forty-One Supreme Beings. However, he is completely devoted to Ainz, his creator, and will even fight the other guild members if ordered to. He is a boastful individual, willing to go out of his way and brag about the awesomeness of his creator's masterful intellect and foresight. Nonetheless, he is capable of showing restraint if need be for the sake of not disrespecting about his master Ainz when in the presence of other fellow NPCs like himself. He also shares a similar fondness with his creator in finding and obtaining new items of unknown origin, much to his delight and excitement.