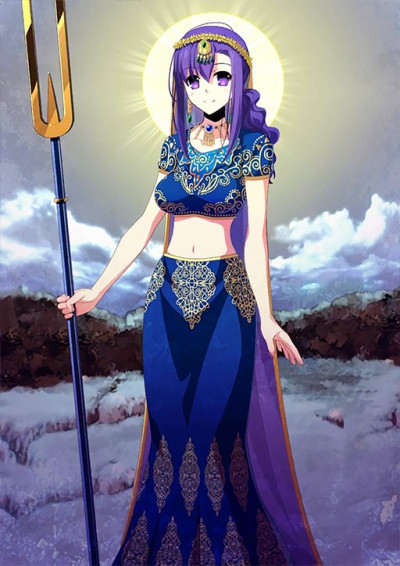 Parvati, Class Name Lancer, is a Lancer-class Pseudo-Servant in the body of Sakura Matou summoned by Ritsuka Fujimaru in the Grand Orders of Fate/Grand Order. While form is not that of Parvati herself, but a pseudo-Servant condition in which a human that has a wavelength close to her own was made into a vessel. Lancer takes the form of a young woman with violet hair and violet eyes, her clothing is a blue silk sari wraped opon her waist area and a blue blouse with short sleeves, both the blouse and sari have a unique golden silk style in them. She also wears a golden circlet that becomes more ornate in her second ascension. One can say she is the Kouhai of Light. The Goddess who has taken in the "brighter" portion of the nature of the girl she has possessed. A gentle and tolerant character without being self-assertive. A talented woman who supports the master from the side virtuously... Her ideal-heroine power and specs are high, but because she chooses the steady, plain path rather than flamboyance, she gives off an impression of dull-wittedness. Furthermore, though she has a docile personality, she is not timid and has a strong inner self. A clump of willpower and grit that, in a sense, will not bend her heart no matter what kind of torture she receives. Because of this, she is extremely fearsome when she truly gets angry. This Parvati will not forget her resentment until she feels at ease. A Pseudo-Servant formed from only the Good-aspect of "the possessed girl". However, even though she is the brighter part, it is not as if there is no "evil trait". Just as if even in justice, there is muddiness, "the possessed girl" has a yandere-type of sense inside her... if handled poorly, it can turn her into something dangerous; such an aspect still slightly remains. That said, even if she is just a little angered, she will definitely not fall into evil. That is because she is of the "brighter alignment" that will not stray away from lawfulness even when she is distressed. As Parvati's Divinity "has no faults in herself", introvertedness and shyness disappear, and her sociability increases. She may get angry and pout, but once she properly thinks through matters as whether those are misunderstandings or differing views, she is a beautiful lady who will either properly apologize or forgive the others.