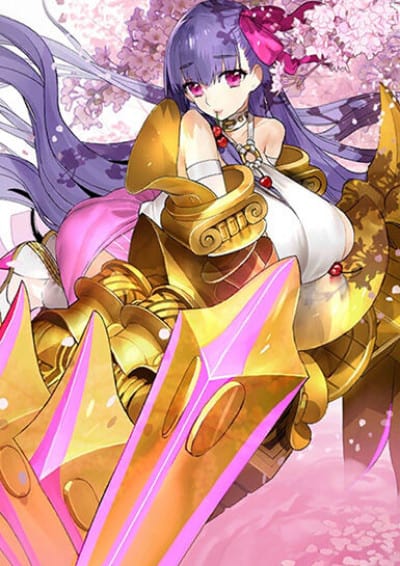 Passionlip, Class Name Alter Ego M, is an Alter Ego-class High-Servant of BB in the CCC Incidents of Fate/EXTRA CCC and Fate/EXTRA CCC Fox Tail. She is one of the Servants of Ritsuka Fujimaru of the Grand Orders conflicts of Fate/Grand Order. Like Sakura Matou and BB, Passionlip has long flowing violet hair (depicted with pink tint in artwork) and wear a pink ribbon on the left side of her head. Her attire consists of neck belt, two strips of belt covering her large breasts, and three more over her torso. She also wears what appears to be a striped bloomer with brown panty hose and a pair of high heel shoes. Passionlip has had part of her arms turned into gigantic talons, representing the swords of Goddess Durga. She also appears to wear a lipstick. She wears cute pink underwear. In Fate:Grand Order, Passionlip now wears a blouse and catsuit that cover her chest, and switches to wear flowing white dress with pink sashed skirt in her final ascensions. Passionlip is the Alter Ego of "the end of love and hate", born out of BB's ego "desire to court" and "hate and love." Her initial personality was "a girl in pursuit of love", which in practice meant she demanded unconditional love from others without ever trying to get to know them; when her monstrous appearance and need to monopolize her beloved thwarted her wishes, she saw the people who would not give her that love as enemies in order to cope with the perceived rejection. After meeting with Hakuno Kishimani and confronting them within her heart, she came to realize the hollowness of one-sided attraction and developed into a withdrawn but compassionate girl who tries to minimize the harm she poses to her allies. She is prone to holding grudges against people she thinks have wronged her, but she rarely if ever acts on them. She dislikes fighting, but her Masochistic Nature skill and tendency to speak her mind without considering people's feelings (or even realizing that her comments might be hurtful at all) makes her a frequent target for the hostility of others. BB and Meltryllis occasionally tease her over this denseness, much to Lip's annoyance. Her timidity, paired with her difficulty being forward with others, was most often demonstrated in the form of stalking. After "a lot of shit went down" (as BB describes the CCC Incident), she has learned to overcome these tendencies and tries her best to make friends. While she retains her tendency to slack off and avoid work when she can, Lip has proven herself to be keenly aware of her faults and is dedicated to overcoming them. In many ways, her personality is now the closest to that of the original Sakura Matou out of the Sakura Five. Passionlip once suffered from a Perception Disorder, where she could not perceive the actual shape of both her hands. Her "mind" caused her eyes to avert her ugly form, leading it to translate her hands as those of a normal girl. She could only see her claws as "something normal". Once, Passionlip could not understand "why was she feared" and would refuse to believe people who tried to tell her about her claws, but she has started to properly face her body by the time of Fate/Grand Order, accepting her monstrous nature and seeing her claws for what they truly are. She says that it was painful for her to see her own figure as it was and she has expressed sorrow over the fact that her claws are only good for destruction, but she feels that disposing of her illusions has ultimately made her happier with who she is. Even so, her greatest wish is to have an ordinary human body so she will no longer have to worry about hurting others by accident. Her wishes for love have not ceased, but her greater self-awareness has tempered her old obsessive tendencies with the knowledge that she might inadvertently kill the one she loves if she acts on those feelings. For this reason, Lip is content with serving her Master from the shadows if that is what they would wish of her, and is grateful to them for accepting her as a Servant in spite of her flaws. Lip's skin is oversensitive, greatly enhancing her perception of both pain and pleasure when she is touched. In her free time, she practices cooking.