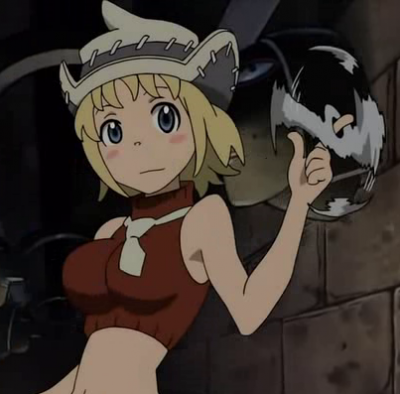 Patricia Thompson is a Demon Weapon and the younger sister of Elizabeth Thompson. Known as one of the "Demon Twin Guns", both her and her sister were known as the "Brooklyn Devils" and were petty thugs until being found by their now current Meister and Shinigami, Death the Kid. Overtime, she reformed from her thieving and ruffian ways along with Liz and became Kid's weapon and later becoming DWMA students within the E.A.T Class. She is also formerly a member of Spartoi. Patty acts and speaks like a young child, often using a singsong voice. She pronounces words like "hello" and "sorry", as a child would "hullo" and "sowwy", and seems to still be learning about simple things such as assigning animal noises to the right animal. This child-like disposition can lead to her coming across as nosy or insensitive, such as when she boldly asks if Crona is a boy or a girl . However, concepts past extremely basic ones may not have been explained to her due to her generally childish demeanour and inability to understand a lot of things, as exemplified by Liz congratulating her on simply getting animal names right. This lack of knowledge may be due to her growing up on the streets and presumably not having a formal education. Her current personality differs from the seemingly aggressive personality she had during her time in Brooklyn, developing her current personality after she met Kid. Unlike her sister Liz, Patty enjoys the drama brought on by Kid's perfectionist attitude; though she does cheer him up when he gets down on himself about it. She seems naïve and simple-minded, seeming not to take life seriously. While Patty had these traits before moving to Death City, such as being delighted that Kid referred to her and Liz as beautiful, or patting her backside at people she robbed, such simplemindedness was far more violent and nefarious. With time working at Deathbucks Café, Patty would spend off-time building a dragon sculpture out of napkins and frightening Tsugumi Harudori with her ghost Halloween outfit. When taking an important written exam, instead of answering questions, Patty took out crayons and began making an origami giraffe out of her test papers, then "broke its neck." When showering, she scrubs so much shampoo through her hair that she forms suds all over her body. She also seems fascinated by the smallest details, such as children's alphabet books or a hairclip. She frequently laughs, even when something bad happens. For example, when Kid bemoans his asymmetry and says he "want[s] to die," Patty responds with laughter: "Kya ha ha! ♪" and, at other times when he is depressed, even poking him with a stick. On the few occasions when she loses her temper, her childlike personality is replaced by an almost insane anger, as if her personality returns to how she behaved when a criminal in Brooklyn. Her demeanor can be so frightening that it scares Kid, even to the point of risking running through an asymmetric Tadpole Bomb minefield. Whether these qualities count as her own form of madness has yet to be clarified. When confronting some serious topics, and dangerous situations, Patty's childishly naïve personality is replaced with a more serious personality, suggesting that her bubbly personality may be a mask or merely how she wants to act. Upon learning that Kim Diehl was scared away from the Academy on accusations of being a witch, she and Liz both looked serious. After Kid is captured by Noah, Patty angrily called her sister a coward and demanded they attack Noah. When Liz broke down crying, Patty showed a surprising amount of maturity by comforting her sister. When having her gender switched inside the Book of Eibon, Patty's personality leans towards his more crazed side, with a higher amount of aggression as he threatens to "beat (Index) up" with a sadistic look on his face.