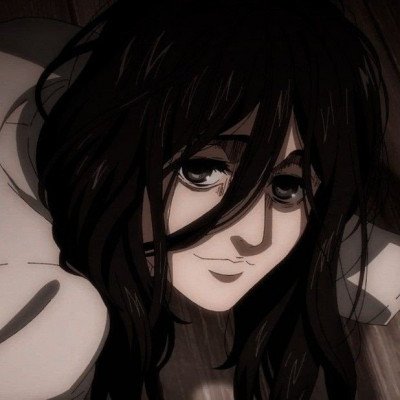 Pieck Finger is an Eldian who served as one of Marley's Warriors and possessed the power of the Cart Titan. Pieck is a short young woman with long, disheveled shoulder-length black hair, a Greek nose and relaxed dark brown eyes. She wears a white blouse, a long trench coat, and skirt which goes down to her ankles as well as black lace-up boots. She also wears the Eldian armband on her left arm, as required of all Eldians under the authority of Marley. Since the end of the Marley Mid-East War, Pieck has been walking with a crutch, having lost some grasp on the ability to walk upright after spending two months in her Cart Titan form without interruption, which she claims is typical for her. However, she can be seen walking on all fours when there are few people around, as she claims it "feels more natural." During her infiltration on Paradis Island, Pieck stole a Survey Corps uniform and used it as a disguise to infiltrate the group known as the Yeagerists. In her younger years, Pieck wore her hair in a ponytail. In her Titan form, Pieck is 4 m tall while on all fours and walks on all four limbs in a quadrupedal fashion. Her torso is long and flat, allowing for materials to be easily packed onto her back. Her face is elongated, bearing full lips and a large nose with a tiny forehead and a large mouth. It has short, dark hair and has no distinct female features, and its long face allows for custom armor, jaws, and war mechanisms to be crafted and strapped to it; this is standard wear for the Cart Titan when it is in action. Pieck is shown to be somewhat sweet and kind, consistently shown to care about her fellow Warriors and the Warrior candidates. She is incredibly intelligent, able to quickly deduce a situation. When the Warriors were discussing the prospect of using the Tybur family to assist in their operations, Pieck was able to quickly figure things out, and Zeke Yeager implies this happens quite often. However, Pieck is usually shown to be quite eccentric and easy going. During the train ride to Liberio, Pieck gladly gave Colt Grice a drink when he asked for one, which led to him getting drunk and leading the other Eldian soldiers in a chant in favor of Gabi Braun. As a result of constantly being in her Titan form, Pieck has shown the habit of walking on all fours when few people are around, stating that it feels more natural and even curling up on a sofa like a cat; she is still capable of walking upright, although she occasionally requires a crutch to do so. She has been showing loyalty towards Marley since her childhood, fighting well for the country's interest, but actually wishing to have her people released from the persecution they face every day. She is also very concerned about the future of the Eldian race as a whole, due to recognizing that the world wants them gone and fears that they will not be of use anymore with the growing increase of technological advancements. Furthermore, her main reason for becoming a Warrior is to get her ill father money for his treatment. She did not display much grudge towards the inhabitants of Paradis Island and criticized her superiors' strategy.