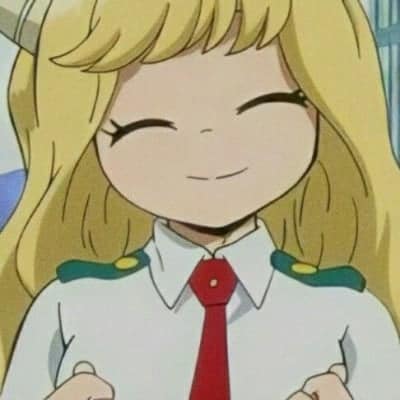 Pony Tsunotori also known as Rocketti, is a student in Class 1-B at U.A. High School, training to become a Pro Hero. Pony is a short girl with a round face and a short equine muzzle, her face framed by thick, wavy blonde hair which reaches halfway down her back, some shorter bangs hanging down her forehead. Her eyes are large and round, Prussian blue in color, and she has a pair of tall, lyre-shaped pale tan horns on her head. Her calves are notably rounded, shaped similarly to those of a horse, and she has brown hooves for feet, and a short horse tail poking out from the end of her tailbone. Pony's hero costume is horse-themed, matching her appearance and Quirk. She wears a horse halter around her head with a lead rope dangling from the back, and her outfit resembles a jockey uniform, consisting of an orange skin-tight shirt with paler markings around her chest and stomach, with matching-colored pants, along with a pair of fingerless gloves. She wears belts secured around her collarbone, biceps, and lower torso, and boots that not only guard her hooves but also have stirrups attached on either side. In the anime, she's seen running on all fours, carrying Togaru Kamakiri on her back. This could imply that her hero costume is designed with a saddle and the aforementioned stirrups so others can ride her like a horse, which would be useful for other heroes in dire situations. Pony is a timid girl. As a foreigner, she does not have much knowledge of the language in Japan. She is shown to be rather naïve and innocent in personality, learning nasty phrases from Neito Monoma without realizing what those words mean, as shown when Neito tells Pony unkind phrases to tell Class 1-A. As shown during the Joint Training Arc, Pony is a thoughtful and diligent person. Being very determined and observant in combat, she was willing to draw out the time and settle for a tie upon realizing that she couldn't secure her team's victory, and not wanting to be the reason they would lose. Despite often being friendly, she did make some unkind comments towards Mezo Shoji in their battle, calling him an "octopus" and saying she doesn't like looking at him. When Pony gets angry or is thrown off by something, she starts speaking in her native language: English. Pony and Manga Fukidashi bond over their love of anime and manga together, and Pony started an anime viewing in the dorms. The rest of Class 1-B know a lot about anime and manga thanks to her.