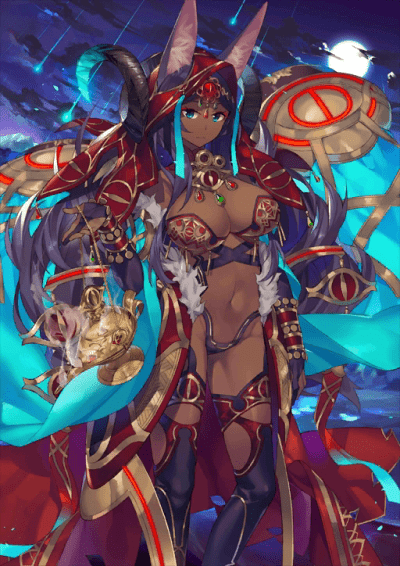 Queen of Sheba, also called Caster of Midrash, is a Caster-class Servant summoned by Ritsuka Fujimaru in the Grand Orders of Fate/Grand Order. Both her ears and tail feel velvety and fluffy. An uncertain existence like a mirage; no, it is perhaps for that reason, that the Queen of Sheba is recorded as a "Peerless Beauty" in many legends, rivaling the majesty of King Solomon himself. Yes, she is indeed a beautiful woman, but for some reason, there's a rather unfortunate vibe to her... of course, no one can understand. Also, many regions have legends about her having an inhuman figure. Arabians said “the Queen had furry legs and donkey hooves”, Southern French said “her feet were webbed like a goose’s”, etc. The correct version is the story that says that she is the daughter of a djinn woman and a human man. It’s also believed that the Queen possesses a shapeshifter’s power to have a variety of appearances, as if she were a light-refracting lens. First, she is one who thrives on prosperous business. There is no tolerance for greedy, pointless expenditure. Profits dealing with money and treasure; they are the very blood and breath that circulate through her mind and body. She very much lives and breathes money, treasure, business connection, and get-rich-quick schemes. Even so, the act she puts on is intentional, having seen into the future, and one must bear in mind that all of this may also be a possible sham.[1] An optimist with a calm and carefree demeanor. Except she’s very predatory when it comes to money. She remembers clearly what people said ages ago and brings that up again the most critical moments. She has a self-deprecating side regarding how, contrary to her glamorous legends, her own past was nothing but modest. And she strongly values modest stories of everyday life. She has powers of future precognition, originated from her djinn bloodline. It’s implied that her meeting with Solomon in the legends was actually an intense mentally draining Clairvoyance vs Clairvoyance battle, where they would go through the three enigmas adapting to what was becoming settled as the future and the past.