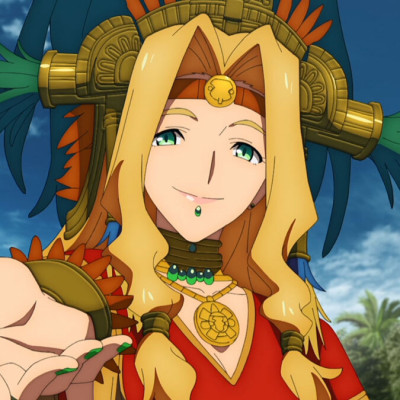 Quetzalcoatl, Class Name Rider, is a Rider-class Servant summoned by Ritsuka Fujimaru in the Grand Orders of Fate/Grand Order. A god of peace and tranquility. Now, Quetzalcoatl is an enigmatic elder sister who is addicted to lucha libre. A gentle god who guided to prosperity and with affection, the lovely humans. A gentle god with a famous legend. Basically, human beings are the subjects she watches over in the near future, and whether they are people who points their blades or whether they are people who believes in themselves, she thinks about how one should not kill thoughtlessly. A bright optimist. However, a faithful optimist as well. She surely has a smiling face that makes the sun apparent in the hearts of men, and that she surely believes in opening up a path to a happy era, not letting that brightness be extinguished no matter what kind of crisis there is. An elder sister with a very big-hearted spirit, a broad-mindedness that is like the earth, and a bright and passionate disposition that is like the sun. Nonetheless, her thought criteria and the scale of her existence is that of a god’s. Quetzalcoatl cannot capture everything on the same scale of a human being’s, and may even sometimes pass a cruel and brutal judgement as a result. She is without mercy to opponents considered a disaster or a foreign enemy, displaying a terrifying facial expression. For most things, Quetzalcoatl endorses communication and prosperity with a smiling face, saying that “it is wonderful everybody’s fineee, so this elder sister is happy!”, but she becomes displeased when talking about alcohol and Tezcatlipoca. This person deeply regrets that she was defeated in the battle with Tezcatlipoca, while simultaneously, she feels a lot of resentment as a result. Rather saying that she’s angry at Tezcatlipoca, she becomes “sullen” towards her powerlessness in defeating Tezcatlipoca, who is the spider, and that Jaguar deity. Regarding “alcohol”, it is the biggest reason why she was defeated in the battle against the former Evil God, and although she wants “no more”, she drinks without thinking in order to encourage herself, even now. Only a small bit will get her drunk, and she will state what she really thinks with her “bad self…” And then, she becomes unconscious, having no recollection of it. The particulars on how Quetzalcoatl got addicted to lucha libre (professional wrestling) is quite simple: she ended up seeing lucha libre during a time when she was summoned into some age, and that overwhelming shock since then made a very strong impression even on her main body sitting on the seat of gods, or so it seems. Her favorite luchador is Mistico. As a god of wind, and as a god of the Morning Star, Quetzalcoatl observed the luchadores (luchadoras in the case of women) flying freely as if they have wings, and she was deeply moved, shedding tears of gratitude, before having experienced then the distant future, or something like that. Thereafter, her fondness for diligence and her characteristic curiosity turned into her fortune, and she became a luchadora just like that, acquiring a persona of a professional wrestling enthusiast that is unprecedented even among the goddesses. During the moment where Quetzalcoatl is summoned as a Servant, she views something sprouting in the Master, and then becomes deeply moved. Basically, she is the Master’s favorite Servant. However, she does not “love the Master” in the meaning of the broader sense, but she loves the “growth of this seed called mankind that is being nurtured within this Master.” Usually, Quetzalcoatl has a feminine tone that is graceful and polite. More or less composed. However, when she encounters something that makes her a little happy, there is a sudden rise in tension within her, and while still like that, she has difficulties in pronunciation, becoming like a pseudo-foreigner in her speech. Her favorite phrase in the moments of agitating her opponent is “Yucatán?” Seen as free and uncontrolled, Quetzalcoatl is a goddess full of kind-hearted intelligence. She hates sacrificial ceremonies and loves mankind. She knows the lucha libre (professional wrestling) of Central and South America by materializing, and she is receiving a great influence from this.

No images found
Want to see more from the gallery? Register or Login
onee-san