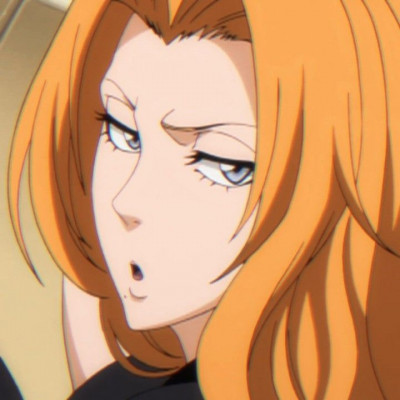 Rangiku Matsumoto is the lieutenant of the 10th Division of the Gotei 13, serving under Captain Tōshirō Hitsugaya. While she was lieutenant under Isshin Kurosaki, her hair was shoulder length, and she wore a scarf, tied into a knot around her neck. Rangiku has long and wavy blond hair, blue eyes, full lips, and a beauty mark located under the right side of her mouth. She is well known for her curvaceous figure; of which her most distinctive trait is her very large breasts. She dresses in the garb typical of Shinigami, though she lets her robes hang loose for her ample bosom to be revealed. She wears a thin golden necklace tucked between her cleavage and a long pink scarf over her shoulders. In addition, her lieutenant's armband is worn on her uniform's sash, as opposed to around the arm. She carries her Zanpakutō behind her back. While in her Gigai in the Human World, she has been shown to dress either very provocatively or stylishly. She wears the school uniform with several buttons undone so that she can reveal her ample bosom as she usually does in the Soul Society with her Gotei 13 uniform. Seventeen months after Aizen's defeat, Rangiku sports a new hairstyle. It is shorter, stopping short of her shoulders and curling near her chin, the left side of which hangs over her face. Her shihakushō also has a split in it, which runs along the length of her right leg. Ten years after Yhwach's defeat, Rangiku has grown out her hair once more to reach her upper back. Rangiku tends to be a slacker who dislikes paperwork and loves to drink. She is not the slightest bit modest about her appearance, frequently referring or complaining about her large breasts in normal casual conversation, much to the embarrassment/amusement of anyone around at the time. She is not above using her considerable feminine charms to get her way, as shown when she tries - albeit unsuccessfully - to bribe Ichigo Kurosaki into letting her stay at his house. In fact, she would even consider stripping naked if no one compliments her on her outfit, regardless of how skimpy it may be. Her easy-going and free-spirited personality makes a sharp contrast to the serious Hitsugaya, but the two seem to be quite close regardless. Rangiku met the young boy prior to him utilizing his power and encouraged him to enter the Shinigami academy. As a lieutenant, she is extremely casual around him, almost constantly by his side and showing deep loyalty to him on several occasions, even though her laziness frequently annoys him. While she seems somewhat self-centered, she is sensitive to the feelings of others, evident when she sees the concern Hitsugaya has for Momo Hinamori, the guilt Izuru Kira shares with her when Gin Ichimaru is revealed as a traitor, and when Orihime Inoue feels depressed about her role in Ichigo Kurosaki's life. Despite her lackadaisical image, she can be extremely serious when needed and is a capable fighter and strategist, best-shown when she uses clever teasing to manipulate the third Espada's Fracción into squabbling among themselves long enough to drop their guard and leave them open for an attack. Rangiku's favorite food is dried persimmon, just like that of Ichimaru. She also shares Orihime's very strange taste in food. She dislikes bamboo shoots because she finds their taste too strong and their texture unpleasant. She likes Japanese dancing, and in addition to her shihakushō robes, she enjoys buying superfluous amounts of clothing from various department stores in the Human world. When she feels like drinking, she finds free people and invites them to come out with her, and then has them treat her to drinks, so that she wouldn't have to spend any money. She is drinking buddies with Shunsui Kyōraku and Shūhei Hisagi.