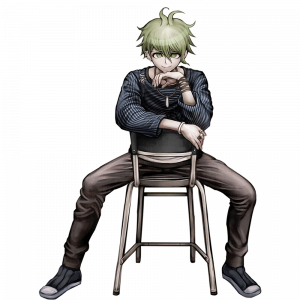 Rantaro Amami is a student in the Ultimate Academy for Gifted Juveniles and a participant of the Killing School Semester featured in Danganronpa V3: Killing Harmony. He doesn't remember his talent at the beginning of the Killing Game, so his title is the Ultimate ??? When he was first introduced, Rantaro seemed like a mysterious individual. Later it could be seen that he is a carefree and relaxed person, and he is actually described as one of the more ordinary students despite his mysteriousness, with he himself stating that he can sometimes get a bit overwhelmed by the others' stranger personalities. Nevertheless, he is shown to have more patience than others with some eccentric students like Kokichi Oma and Miu Iruma, having a tendency to just laugh off some of the potentially hurtful things they say. Even though Rantaro cannot remember his talent, he doesn't seem worried about it, instead, he simply says he just looks forward to finding out what it is. He is usually seen smiling and describes himself as "not a suspicious guy", and he gives off a really calm and composed vibe, making him seem like a pretty reliable person.[5] His speech is characterized by being very friendly and colloquial, using the "～っす/-ssu" copula in his sentence (in the Japanese release only). Fan translations usually adapt this pattern by using teenage slang in his lines. Despite his appearance and manner of speech, he has cold, excellent insight, and is both determined and brave. He even has downright frightening expressions whenever he gets very serious. While the other students descend into confusion and chaos when Monokuma and the Monokuma Kubs state their objective, he is capable of coldly interrogating them about their motives. He also shows a deep understanding of the situation and often talks and acts like he knows something the others don't know, saying profound-sounding and enigmatic sentences, which often make him sound quite suspicious or even eerie. He is shown to be very competent in the Killing Game scenario, understanding that in order to truly win the game you must end the game itself instead of outwitting other participants, and he warns Kaede about her inspirational speeches and strong cooperation with others, because it makes her a notable threat in the eyes of the mastermind. During his Free Time Events with Kaede, she notices that he calmly observes other students and makes logical assumptions about them. He plans to end the Killing Game, telling the others not to intervene, but he ultimately fails because of Kaede's actions.