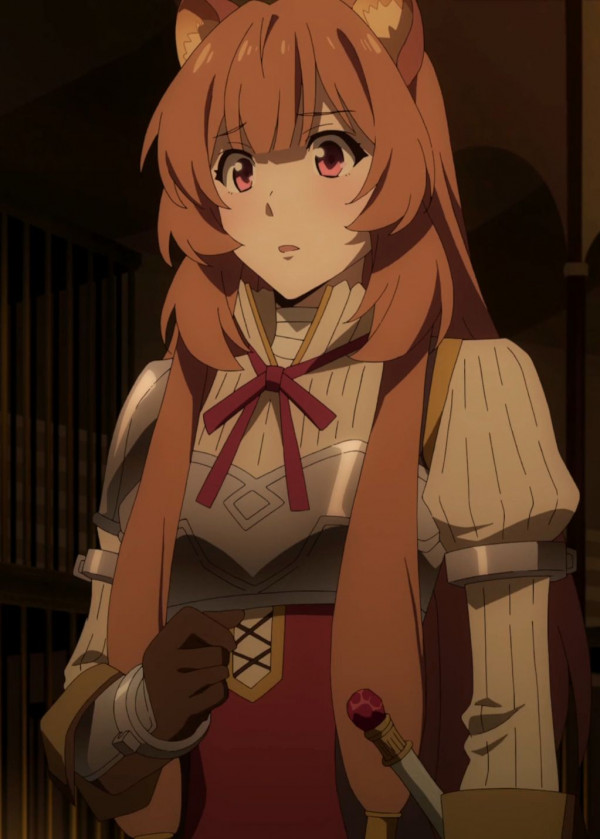 Raphtalia is the main heroine of The Rising of the Shield Hero series. She is the first real companion of the Shield Hero. Although she was originally bought as a slave, she was never treated badly and forged a strong bond with her master. She later travels to another world and obtains the Vassal Katana, becoming the Katana Hero. Additionally, she becomes the Heavenly Emperor of Q'ten Lo after overthrowing the previous emperor. She has undergone some significant changes throughout the story. When Raphtalia is first introduced, she is a child with long, unmanaged hair and a dirty cloth gown. After being purchased by Naofumi, he gives her a haircut to an acceptable length, gives her a bath, and buys her a much more suitable set of clothes to adventure in. As a mixed-race of Raccoon and Tanuki, Raphtalia is shown to have fluffy dog-like ears and an averagely sized bushy tail. After several weeks of travelling with Naofumi, Raphtalia's body inexplicably changes and she gains the appearance of a beautiful young adult. It is revealed that demi-humans initially mature in relation to the progression of their levels, which leads to Raphtalia's rapid development. During their travel to the Glass' World, L'Arc mentions to Naofumi that Raphtalia has reverted back to her child-self when her level is been reset to one and she has to grind to reach her adulthood in that world before reuniting with Naofumi. In her adult form, Raphtalia begins to wear clothing much more fitting for a warrior, which consists of a hide breastplate, skirt, lace-up boots, and a pair of gloves. Raphtalia also switches from a small knife to a full-sized sword during this time. Raphtalia is initially very shy, sickly, and fearful as a result of her status as a slave, as well as suffering from trauma with memories of the destruction of her village. After the encounter with the two-headed dog monster, she overcomes the trauma of her parents' death at the hands of the Cerberus and acknowledges Naofumi as a hero in her own mind. Naofumi acknowledges the strength of her heart. Despite been through a lot for her age, from seeing her parents die, to being sold with her fellow survivors, to seeing her best friend tortured to death beside her, she manages to maintain her morals and sanity. She hopes to reestablish her village and fight for the country that wronged her kind. This causes Naofumi to take up his role as a hero seriously and help her in the reconstruction of the village. She desires for Naofumi to act as a hero and is disappointed by many of his actions. The current Raphtalia is focused on efficiency, in both combat, training and money expenditures. Seeing this trait, Naofumi feels that he brought her up wrongly, as she doesn't show any girly desire for her appearance or care for efficiency. She is extremely devoted to Naofumi and harbors feelings for him which he remains oblivious to, preferring to see her as his 'daughter' he raises her in lieu of her deceased parents. As she matures, Raphtalia not only becomes much more skilled and deadlier in battle, but she also gets much bolder, opinionated, stronger-willed, and fiercely protective of her beloved Naofumi.