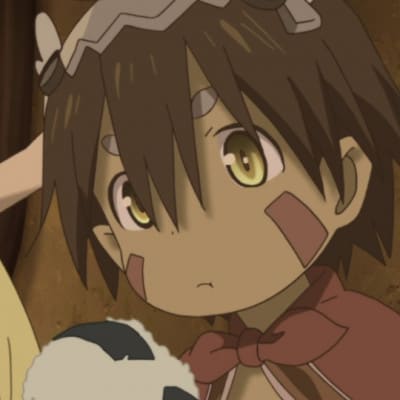 Reg is a robotic being who appears to be a little boy. His actual age, origins, and even name are unknown because he cannot recall anything about his life before his encounter with Riko. He is named after a dog Riko used to have. Having a seemingly artificial body, Reg might be the only being completely immune to the Curse of the Abyss. Because of this, he is sometimes referred to as "The Treasure of the Deep." Due to design similarities, Gaburoon wondered if Reg and they might share the same creator; noting that Interference Units don't cross layers and them having no data regarding Interference Units of Reg's kind. Reg has light brown skin and dark hair. He wears a metal helmet with two asymmetrical horns protruding out of the sides and what appears to be a glass lens in the front, which, according to Nanachi's theory, displays the number of Incinerator charges he has left to use. Underneath his helmet is a jagged metal headband of some sort, with bolts on either side keeping it in place on his head. His ears are slightly pointed. Reg's eyes are yellow, and his pupils are catlike, vertical slits. There are two red patches of skin on his cheeks, and four more on either side of his rib cage. His eyebrows are small and gray. Though he is a robot, the only parts of him that appear to be mechanical are his arms and legs, which are bulky compared to the rest of his body. He has nipples, a belly button, and even human genitals. He is usually shirtless, save for the tattered red cape he is wearing when Riko finds him. His washed-out green and purple pants are baggy and stop just below his knees. In the events transpiring at the Ido Front, Reg loses his right forearm while Umbra Hands run tests on him and earns a scar on his belly button after his fight with Bondrewd. In an encounter with a Turbinid-Dragon, in which he blocks a strike from the creature, Reg's remaining left arm gets chipped leaving a small scratch on his left forearm. Despite being a formidable fighter, Reg is rather shy, naive, and unassertive. He blushes easily and often cries when in distress. However, when forced into danger or an unpleasant situation, he is shown to be hot-tempered and sharp, compared to Riko's analytic, noncombatant role. Regardless of his skittishness, Reg has made it his sworn duty to protect Riko and doesn't hesitate to put up a fight when she is in harm's way. According to Ozen, the way he speaks and handles his body is similar to Lyza. One of his favorite words to say is "irredeemable," which was a word that Lyza said often.