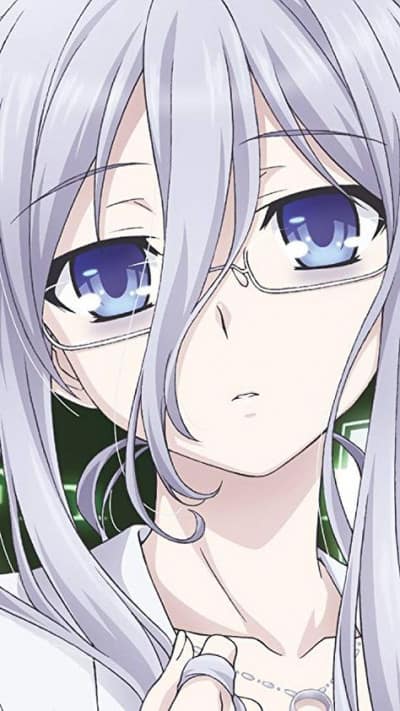 Reine Murasame is the Head Analyst aboard Fraxinus and a non-certified medic who can perform simple first aid tasks. It is revealed in Volume 16 that she is the enigmatic entity known as Phantom. Reine is unarguably a beautiful woman with pale skin. She still looks to be in her 20s, despite saying that she hasn't slept in 30 years. She has long, unkempt, pale blue hair which is tied into a right-side ponytail and blue eyes which seems to always be sleepy. Her most distinct feature is the pair of dark circles beneath her eyes. She wears a pair of glasses with a circular frame. Her height is 164 cm, and her three sizes are B95/W63/H89. She is usually or always seen with a small blue teddy bear that fits in her breast pocket. During her duty on Fraxinus, she wears <Ratatoskr>'s uniform, while as a Physics teacher at Shido's school, she wears a long white lab coat over a pink shirt with a rather low V-neck collar, purple miniskirt, a pair of black stockings, and a pair of blue teddy bear slippers. She also wears a small silver ring on her silver chain necklace. When disguised as <Phantom>, Reine typically surrounds herself with some sort of mosaic that, while people can see and hear her, makes it impossible for people to determine her appearance or the sound of her voice. When talking with Shido after he traveled back in time, she temporarily took on the form of Rinne Sonogami, something which she described as using "another shape". During her brief fight against Kurumi, Reine equips an Astral Dress reminiscent of the one worn by her original self Mio Takamiya. The dress has a translucent color like water droplets and has a noticeable slit that shows off her left leg. The dress itself is decorated with flowers and golden jewelry. Large strands of fabric that are shaped like leaves can also be seen extending out from the Astral Dress. Reine is a very logical, reasonable, and mature woman. Surprisingly enough, and despite her usual cold demeanor, she has proven countless times to be a very sensitive, considerate and understanding person. She is quick witted enough to adapt to the sudden appearance of the Yamai sisters and seamlessly integrate them into her class field trip without raising suspicions from others. She's also good at giving advice and coaching Shido during his dates with the Spirits, even Kotori seems to take her advice well. Reine is very good with handling children as when Natsumi turned everyone but Shido into children she was able to calm them all instantly. She has also displayed this skill towards Shido himself, calming him down after he recognized Kotori as a Spirit. Shido himself stated that she is like a mother, which she seems to react to in a strange way. She has a tendency to faint suddenly due to her suffering from sleep deprivation. Despite using extensive sleep medication, Reine is extremely insomniac, with herself remarking that she hasn't slept in 30 years. The cause for this is revealed to caused by PTSD, with her suffering from repeated nightmares of Shinji's death every time she tries to go to sleep. While Reine is normally calm and collected, there are rare occasions where she shows anger. These instances are rare enough that Kotori had never seen her angry until the events of Volume 3, when Reine showed her Mana's body had been heavily modified to give her an abnormal strength at the cost of lowering her remaining lifespan to 10 years. When disguised as <Phantom>, she retains her calm and analytic personality, easily deducing that Origami traveled in time solely from her possession of Metatron, which she hadn't given away yet. Here, she appears to have a goal orientated mindset focused on the fulfillment of something that she describe as her wish. To that end, she has turned several humans into Spirits using Sephira Crystals. To do this, <Phantom> has shown to be willing to use several underhanded tactics. When she turned Kotori into a spirit, she preyed on her desire to stop being a crybaby. When she turned Miku into a spirit, she used her hatred of humanity (especially of men) and her despair for losing her voice. When she turned Origami into a Spirit, she used her desire to obtain power. <Phantom> neglected to mention what Sephira Crystals would exactly do to them. It seems that Shido also fits into her plans somehow, as implied by both Westcott and her actions. She also doesn't appear to like the codename given to her by Ratatoskr, as seen by her displeased reaction when Shido called her by it. <Phantom> appears to evaluate a person based on their potential as a future Spirit. To that end, she has been looking for talented people to turn them into Spirits. After the Origami from the future attacked the <Phantom> from five years ago and was able to remove her noise, <Phantom> noted to herself that she couldn't think of not turning a girl with so much talent into a Spirit, despite knowing that she would turn against her one day.