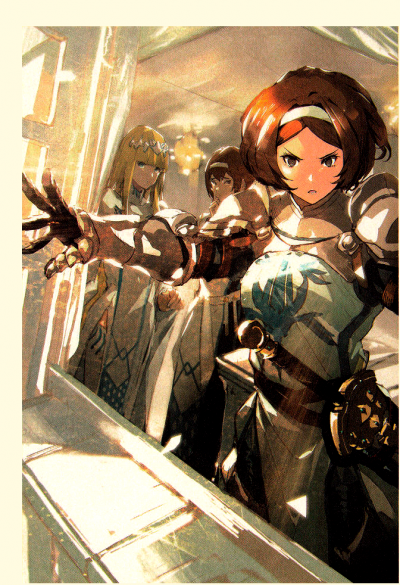 Remedios Custodio is the former leader of the Holy Kingdom's Paladin Order, after Holy King Caspond had her demoted, as well as a member of the Nine Colors. She was also the older sister of High Priestess Kelart and bodyguard to Holy Queen Calca. After the Demi-Human Alliance conquered the Northern Holy Kingdom, she joined the Holy Kingdom Liberation Army. Remedios is a woman with short bob-shaped brown hair affixed with a white hairband, exposing her forehead. While she is as beautiful as the Holy Queen, her eyes contain a cold, razor-sharp look, like the edge of a blade. She is dressed in a suit of silvery full plate armor and a surcoat. It can be said that her attire is a traditional vestment of the paladin order's grandmaster, an ancient suit of magical artifice. She is also equipped with a sword located at her waist. Remedios does not use her head much and is driven mainly by her ideals and emotions, which is a source of great inconvenience for others. Remedios tends to be brash, headstrong and often acts before she thinks about the consequences. She felt that from a young age that she was better equipped to be a warrior than a priest or scholar so she devoted all of her energy to her combat prowess. However, this focus on combat to the exclusion of everything else meant that she was deficient in matters that demanded creative thinking, calculation and more subtle solutions. As a result, Remedios does not like to think and will often push work that requires more intelligence and understanding on to others. She also has a habit of scapegoating people or passing the blame to others and is fine with actions perpetrated by others that she is against doing herself so long as she isn't connected to the actions and thus need not take responsibility. She tends to also try and take the credit for good suggestions made by others by trying to make it seem like it was her idea to begin with. Remedios is stubborn to the extreme and rarely relents in her actions or concedes her opinions even in the face of catastrophe. Although it could be a part of her own flaw as an individual, it was also the reason that she could embody absolute justice in the first place. She is highly self-righteous in her dedicated to her belief that demi-humans are a threat to humanity. For that reason, she would go so far as to kill demi-human children without a second thought or guilt to keep her nation and its people safe from any harm's way possible. In her heart, anything she did for the sake of her kingdom was acceptable from her point of view. On other hand she has a great compassion for her fellow humans and would heal a mere foot soldier in the midst of battle, even when there are other priorities. She was fiercely loyal to her Queen Calca and believed wholeheartedly in the Queen's ideal of a nation of peace without suffering. In this regard Remedios was very good-hearted and noble in her desires. In spite of her many flaws, Remedios could be considered a decent person at heart. However, her behavior can be described as childish at best. At worst, her behavior is similar to a spoiled child who is used to have everything given to her and have everyone follow her idea. The changes in her personality and behavior are demonstrated as a child who has just come in contact with the real world, and begun to constantly lash out the surrounding people to vent her anger. With the loss of both the Holy Queen Calca and her sister Kelart, Remedios can no longer hold back her frustration. She has descended into a state of rage to the point where even a simple insult will result in her turning violent. As the demi-human war dragged on, she became more isolated as people began to fear even getting close to her while Remedios herself became more bitter and withdrawn.