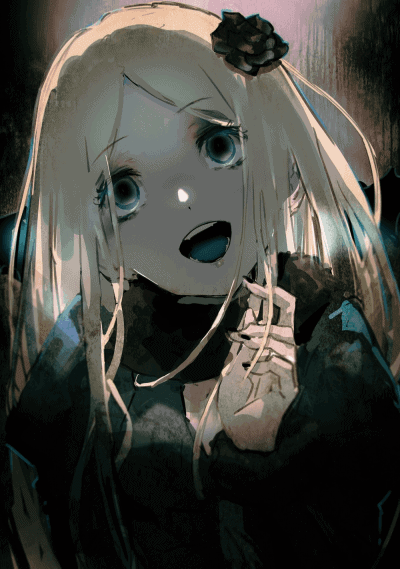 Renner Theiere Chardelon Ryle Vaiself is a former human turned Imp and the former Third Princess of the Re-Estize Kingdom. While she was publicly known as the "Golden Princess," she is actually a yandere infatuated with her bodyguard, Climb, and later sold out her country to the Sorcerer Kingdom. Renner is described as a young girl with long golden hair, silky smooth and supple as it drapes over the back of her neck. She has vibrant, dark blue eyes that shine like sapphires, filled with warmth. She wears a fashionable white dress, which further strengthens her image of purity. Around her neck hangs a golden necklace, appearing to symbolize a noble soul. After changing her race into a demon, Renner now has darker eyes and even longer hair, almost reaching her feet. Her teeth now have fangs and she has small wings on her back. In terms of her outfit, she wears a pure black dress with black heels and replaces the crown decoration in her hair with a black rose. Renner was known publicly as the Golden Princess for her benevolence and kindness. While Renner was believed to be a saint, in reality, she has a psychopathic personality and doesn't care about the feelings of others. The only exception to this is Climb, who she views as her "puppy." If he got wounded, she declared that anyone involved would be ruthlessly killed; these tendencies make her similar to a Yandere. She is calculating and manipulative with her two facades, making sure to maintain the proper character those who often see the Princess as. As exemplified by her becoming secretly affiliated with Nazarick, she would not hesitate to betray her family, her country and her people, and would do so without a shred of regret. Considering her true personality, Albedo describes Renner to be a spiritual heteromorph with the body and form of a human. Her mind comprehends both good and evil; she is the type who is not bound by the petty constraints of morality, but who calmly works to advance her own agenda. She is even perceptive and keen of some people's motives, going to the extent of deducing it upon connecting the dots. As stated, Renner possess a simplistic and detached view of humans in general. This is seen where she has been stated to solely see all of her subjects of the Re-Estize Kingdom (aside from Climb) as means to an end, with her neither feeling love or hatred for them. And while she has been stated to be capable of feelings grateful to them, its been stated that her feelings of gratitude to them was a feeling similar to the way a normal person is grateful for the existence of food and nothing more. After undergoing a racial change into a demon, Renner no longer feels any need to hide her true nature when interacting with others, except for one sole exception.