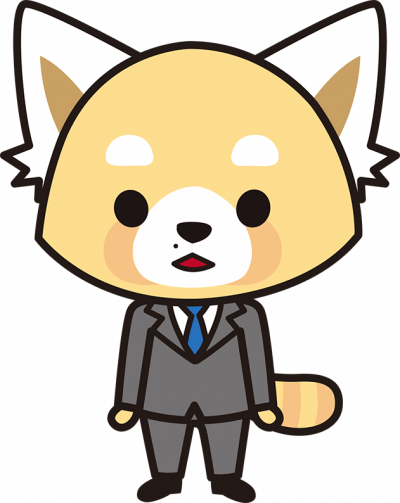 Resasuke is a 25-year-old sales office worker at the same company as Retsuko and is a support character of the Netflix Original series Aggretsuko. Resasuke is a daydreamer who has an unusual fascination for canned coffee and plants. Just like Retsuko, Resasuke's appearance is based on the Red Panda. Unlike Retsuko, Resasuke has light yellow fur and lacks the distinctive white stripe under his eyes. He has white ears, white and tan around his muzzle, tan fur tufts in his ears, a mole under his nose, and his mouth is always ajar. During work, Resasuke wears a white dress shirt, blue tie, and matching gray suit jacket and pants. While out on dates, Resasuke wears a white shirt, blue suit jacket, khaki-colored pants, and brown shoes. When Retsuko was in love with him, she sees him differently than how he truly appears. His eyes are angled with stars in them, the white markings are shaped like eyebrows, his mole moves to under his left eye, and his voice becomes deeper. Resasuke is a daydreamer at best who constantly spaces out to the point of frequently missing his train stop and being late to work. Resasuke also easily gives into peer pressure, mostly notably when he dated Retsuko despite not having feelings for her simply because Manumaru told him to. He is very quiet and usually doesn't speak unless spoken to, and doesn't seem to be able to read social cues. His studio apartment is full of plants, which he takes good care of and sometimes talks to, showing that he prefers interacting with plants over people.