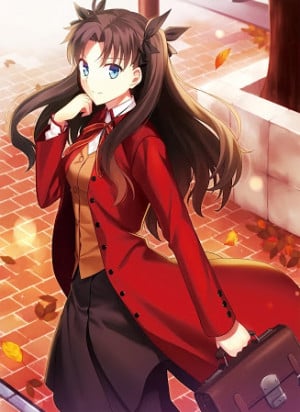 Rin Tohsaka is one of the three main heroines of Fate/stay night who acts as the Master of Archer in the Fifth Holy Grail War. She is the current head of the Tohsaka family and the biological older sister of Sakura Matou. After the events of the Holy Grail War, she formally joins the Clock Tower and studies under the tutelage of Lord El-Melloi II in the El-Melloi Classroom. She appears in the The Adventures of Lord El-Melloi II as a major character. As part of the El-Melloi Classroom, she is one of the many Masters of True Rider in the True and False Holy Grail Wars of Fate/strange Fake. Rin is a young woman with aqua eyes and long wavy brown hair in a two-side-up hairstyle, which consists of part of her being made into twin tails tied with black ribbons, while the majority hangs loose. During school, she wears the standard Homurahara uniform, which she sometimes accompanies with a long red coat. Her casual clothing consists of a red turtleneck, a black skirt and long black socks under brown leather flats. When she was young, her clothing consisted of a white shirt with a red necktie, a red skirt and long black socks, much like when she becomes older. In the fifth Holy Grail War, she prepared a plain skirt and shirt for Saber, though it was originally a birthday present from Kirei. As an adult, she put down her hair. Two years after the Heaven's Feel route ending, she wears a long sleeve red shirt and a long maroon skirt. Her alternative costume is a long red jacket, a white polo neck jumper, a black mini skirt and long leather boots. Rin is a perceptive, serious, resourceful, and very competitive person. Though she is widely admired at school as a prim and proper honor student, it is a front she puts up in order to prevent others from prying into her life. In private, she is notably loud, shrewd, stingy, and bossy but usually means well for those she cares about. She is known as a model student and idol of her school. Her manner of speech is often hostile and dismissive of other people, but deep down she has a caring, big-sisterly disposition. Her tendency of making trivial mistakes at the worst possible moment is a hereditary curse. Though she really is a lot nicer than she seems, she claims to always make her decisions based on cold, rational logic in the end. In her own words, it's "not a very cute personality". In fact, her choice in personal clothes is probably an overreaction to that.[7] Despite claiming that she would do anything in order to win the Holy Grail War, no matter how underhanded, she has a deeply rooted sense of honor, seen refusing to dispose of Shirou despite numerous easy chances of doing so, simply because she owes him and deem disposing of him without clearing her debts to be cheap. In short, Rin is a tough, fiery, perceptive, judicious, mischievous, and considerably aggressive tsundere who shows both sides of the trope. During her childhood, she understood the Fourth Holy Grail War about as much as Shirou understands the Fifth, seemingly understanding while not actually comprehending it. She saw her father as a great magus who must be respected and loved, but failed to understand the negative aspect of his personality, the coldheartedness that accompanied such an ideal. If he had lived until Rin could actually understand his personality, it is likely that it would have greatly affected the development of her own personality. It is unknown if she would have opposed such inhumanity and left the path of a magus, or if she would have become a “perfect and coldhearted” magus like her father. Either fate for Rin would have been one far away from happiness. Due to Tokiomi's early and untimely death, she was not aware of the original goal of the Holy Grail War to open a “hole” beyond the World. For the sake of her deceased father and her family's name, Rin seeks to obtain the Holy Grail, though she has little personal desire for it. Unbeknownst to her sister Sakura, Rin feels guilty and believes that she has abandoned Sakura after she is adopted into the Matou household, so much the guilt was what driven her to revive Shirou, Sakura's target of affection, at the brink of death. While Rin eventually admits that she has always watched Sakura from afar, she never realized how much Sakura suffered under the Matou and fooled herself into thinking Sakura was happy to alleviate her own guilt. She spent just as much time quarrelling with Shirou as she did cooperating with him. She's a mischievous girl at heart, so she loves teasing serious people such as Shirou. However, Rin did want to kill him when she saw his Gradation Air in his shed, thinking that he lied to her. Although she claimed to be not interested in anyone, the Heaven's Feel scenario revealed that Rin has been attracted to Shirou after witnessing his stubborn attempts to finish a high jump that he had no chance of finishing when they were younger. Rin was very supportive of Shirou's relationship with Saber in the Fate route. In the Unlimited Blade Works, they became aware of their mutual crush and attraction which developed to love. In Heaven's Feel, Rin reveals her attraction to Shirou while giving advice for Sakura and their closeness makes Sakura jealous and resentful of Rin. Her hobbies include admiring jewels. Although wealthy from her family's magical patents, she feels somewhat ashamed of having to rely on the work of previous generations.

No images found
Want to see more from the gallery? Register or Login
tsundere