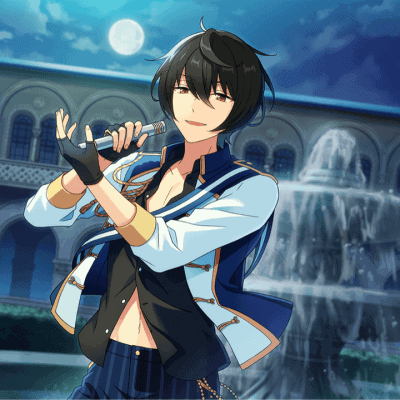 In the daytime it's hard to get his engine going, so Ritsu is often found napping in all sorts of places. He goes at his own pace and is relaxed, but can say some cutting things when he thinks quickly. His singing voice is like a sweet whisper, and his performances flow languidly. A member of NEW DIMENSION’s Knights. Ritsu has mid-length black hair with bangs and side bangs that frame his cheeks. He has a tiny speck of hair and a stray bang sticking out of his head. He has red eyes and a fair complexion. At school, he wears his school blazer unbuttoned over his gray sweater. His white shirt is untucked with a messy collar. He wears brown dress shoes and loose plaid pants. On stage as a member of the unit Knights, Ritsu wears a dark blue coat with white sleeves and a ruffled tailcoat over a white shirt. There’s a vertical blue line on his sleeves. The sleeves have a blue cuff, with a gold accent to them. His white shirt has a black vertical line in the middle, accented with gold. His shirt collar is blue, accented with gold as well. On the shirt’s collar, there are swirly gold patterns. Where the buttons would usually be, are golden frog closures. On his jacket there are black epaulettes. The rope on the epaulettes are golden. From his left epaulette are two golden strings, which lead to a blue banner with the fleur de lis symbol on it which is pinned on the right side of his chest. On the back, he wears a cape which is blue on the top end and white on the underside. There is a golden accent on the blue half of the cape. His pants are dark gray, with light gray vertical lines on them. He wears a thick belt with four golden buttons on them. There are golden lines on the side of his belt. Attached to the belt are two golden ropes. His boots are white, with the tip and the bottom being black. There is a black vertical line going down the shoe, with gold shoelaces. Under the shoelace tie are two black belts with a straight vertical gold buckle. Ritsu wears black fingerless gloves. Though he may seem cold and uninterested, Ritsu is a playful and intelligent person at his core. Energy isn't something that comes naturally to him, and he is instead quietly passionate, and likes to tease others, enjoying their reactions. At the start of the year, Ritsu tended to distance himself from his classmates and idol activities, which he viewed as laborious and boring because of the previous fractured state of knights. He was reluctant to make friends due to this (Mao also insinuates he has social anxiety issues). But as the year goes on, Ritsu begins to open up and form important bonds with his friends and unitmates. He is very loyal and affectionate to the select few he is truly comfortable with. Ritsu can be blunt and harsh to a fault, but is very intuitive and often picks up on others' emotions. He regards psychoanalysis as a 'bad habit' of his, yet is very adept at it. At times, he be very clingy, and loves it when others praise him. He can be violent, especially towards his older brother, and doesn't hold his tongue often. Despite this, he can get very protective of his loved ones, to the point of being possessive. Ritsu has abandonment issues largely stemming from Rei's absence last year, which contributes to his tendency of clinging to those he truly loves, yet also his habit of distancing himself from others as a whole. He shares Rei's aversion of sunlight, and becomes more active and 'alive' at night. They also share a habit of jokingly regarding themselves as older and wiser than their juniors. He loves music, and plays the piano. His songwriting reveals a much deeper and more wistful side of him, something that he almost never reveals to others, preferring his smug and sleepy persona. Somewhat surprisingly, though, he tends to keep things to himself to avoid burdening others. As it stands, Ritsu values his unit and friends very much, and is willing to put effort into his idol work (or at least that which interests him).