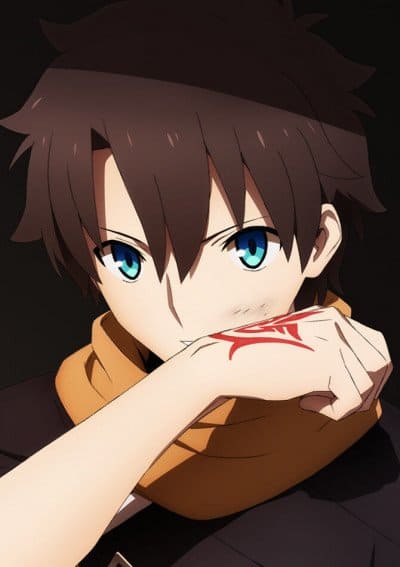 Ritsuka Fujimaru is the protagonist of Fate/Grand Order, acting as the Master of many Servants for the purpose of solving the Grand Order conflicts; however, the Servant he is most closely associated with is Mash Kyrielight. The name and gender of Ritsuka can be actively changed by the player, with the nicknames Gudao and Gudako being often used by fans for the male and female version respectively, rather than their proper name. The Protagonist is of average build, though more visibly muscular in the male version. Mash described him of medium height. The male version has short unkempt dark brown hair and blue eyes. His Command Spells are located on his right hand and, contrarily to Hakuno Kishinami, differ in form between male and female version. The Protagonist wears various different Mystic Codes. His alignment is Neutral Good, but the Lion King, one of Chaldea's enemies, defined him as a soul who “knows good but commits evil, and allows evil while being good." James Moriarty similarly describes the protagonist as "good, yet not hating evil, tormented by evil, yet carrying on doing good". He is highly empathetic and has a gift when it comes to dealing with Servants, and is able to form strong ties with even the most dangerous and unstable of Servants summoned by Chaldea. While he is aware that his own skill as a magus is questionable at best, he trusts in his Servants to act as his strength in his stead. The authoritative Chaldea Director Olga Marie Animusphere described him as “Quiet, but with some nerve” and Sasaki Kojirou noted he lacked the pride displayed by most mages. The goddess Quetzalcoatl noted his discipline, righteousness and earnestness, and Mash remarked on his flexibility in being able to adapt to almost any situation regardless of how extreme or bizarre it might be. Meltryllis reflected fondly on his kindness in helping her when she had nothing to offer him in return and his willingness to trust her despite having no reason to do so. Shakespeare described him as someone with an Iron Heart and will despite being weak to compliment Mash who was a iron body knight with a weak heart. Early in his role as a Master, when pressured by Shadow Servants during the Fuyuki Singularity, he was able to stay calm when the Director and Mash panicked, a composure that was repeatedly noted during other missions. After being defeated by the protagonist's servants, Vlad III praised the protagonist's abilities as a commander and asked him to summon him in the future. Mash recognized the protagonist as her senpai, a role she defines as “someone inherently human and of average status, not the best but a normal person who strives to do their best, who doesn't hurt others and never gives up. An upright human being.” Cú Chulainn echoes this sentiment that Ritsuka is "the most human of all humans I know"- always trying his best, borrowing the wisdom of those that came before him, dreaming of a better future, and always being willing to fight for that future even against impossible odds. Fujimaru initially displays very little sign of stress despite having been thrust into a supernatural war to save the planet where his defeat will mean the annihilation of humanity. This is not true within the Absolute Demonic Front Babylonia anime, in which Ritsuka is shown having a flashback to the death of Director Olga Marie Animusphere. He expresses a sense of powerlessness, unable to save others. This changes after the climax of the Russian Lostbelt, in which Fujimaru is paralyzed by the spoken out repercussions of having to murder his former allies and causing a world to die that his might live. Something he has known but pushed through to continue. It is not until Patxi sacrifices himself to save him that he breaks out of this state, and he remains deeply conflicted throughout the next few Lostbelts. Additionally, Ritsuka is aware that as a provisional Master he could be replaced at any time and does not know if culling the Lostbelts will even be able to restore Proper Human History. Even so, Ritsuka refuses to succumb to despair and is always ready to keep fighting for the sake of humanity's future and his own wish to keep on living, following Dr. Roman's example of wanting to see his journey through to the end regardless of what it might entail. Events within the game and character dialogue present the fact that the protagonist is apparently a fan of mecha-themed pop culture, such as Gundam; this is one of the few actual interests or hobbies the character has which remains consistent throughout Fate/Grand Order. In the anime adaptation of Absolute Demonic Front Babylonia, Fujimaru reveals that Ushiwakamaru was his childhood hero.