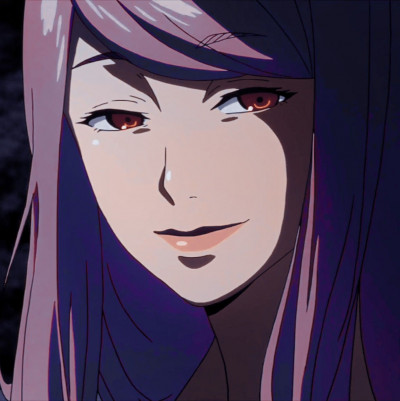 Rize Kamishiro was a ghoul and the foster daughter of Matasaka Kamishiro. Born into the Washuu Clan, Rize was the illegitimate daughter of former CCG chairman Tsuneyoshi Washuu, where, as a child, she escaped from the clan and organization V. She was known under her nickname Binge Eater. Due to her eating habits, Rize was a threat to most ghouls in various wards in Tokyo before her death in the Steel Beam Incident where her kakuhou was used in the kakuhou transplant surgery to transform Ken Kaneki into a one-eyed ghoul. Rize later was discovered alive and captured by Dr. Akihiro Kanou where her kakuhou was farmed to transform Kurona and Nashiro Yasuhisa, and Souta Washuu-Furuta into one-eyed ghouls. Eventually, she was used as the host for the body of Dragon, indirectly responsible for the ghoulification of Tokyo, before she was finally put out of her misery at the hands of Ken Kaneki. Rize appeared to be a slender girl with chest-length purple hair that has bangs swept to the left side, purple eyes, full pink lips and an hourglass figure. As a ghoul blending into human society, she wore normal attire fit for a young woman, showing a bigger preference for dresses. After she had moved to the 20th ward, she was seen wearing a pair of red frame glasses (the frames being only at the lower half of the lens), even though she did not seem to have any eyesight problems. Her attire revealed some cleavage, possibly to seduce and allure males as her prey. Rize was very attractive and is aware of this fact, often manipulating it to her advantage. After her transformation into Dragon, Rize had long white hair with decorative marks around a paled face near her eyelids and across her forehead. In her younger days, she had shorter hair. Rize was a voracious, independent ghoul who acted as a femme fatale to those who fell victim to her charms. She was an enigmatic female with many acquaintances who were left with a mysterious impression of her, and those who came into conflict with her rarely came out alive, with the exception of Kazuichi Banjou, who found her self-dependence and strength attractive. She was extremely selfish who thought little to none of the hardship her binge eating habit caused to other ghouls. She had no ambitions and wandered the wards aimlessly to appease her boredom. After she was rescued by Renji Yomo, it was shown that the effects of captivity and starvation had reduced her to a near-mindless state as she was unable to recognize her surroundings and had to be kept in restraints. This also brought out a vulnerable side of Rize as she cried out to her foster father in fear.