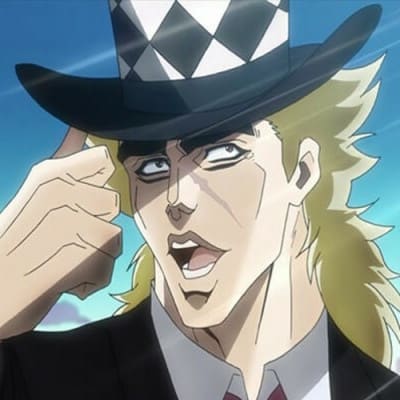 Robert E. O. Speedwagon is a major ally featured in Phantom Blood and is a minor ally in Battle Tendency. Robert E. O. Speedwagon is a man of medium height and athletic build. In his prime, he is portrayed with a long fair-haired mulletW and a large scar across the left cheek, leading from his nose to his jaw. His typical attire consists of a three-piece dark suit with a tie, and a bowler hat (in which are hidden blades). In the later portion of Phantom Blood, he replaces his headpiece with Will A. Zeppeli's chessboard patterned top hat. In Battle Tendency, Speedwagon sports a greyed flattop and a much older complexion. He wears an elderly three-piece suit complete with a tie and at times, a fedora decorated with a feather. Robert E. O. Speedwagon is a hot-blooded and honorable street thug and later businessman. Despite his activity as a hoodlum, Speedwagon is a righteous man. Due to his ability to "smell out" the personality of people, he had recognized Jonathan's noble spirit during the events at Ogre Street and accompanies him on his further journey to defeat Dio, whose facade as a cover for his naturally evil behavior was easily denied by Speedwagon. Speedwagon is incredibly loyal to his friends, befriending Jonathan was in part due to the gentleman being kind to his partners in crime. He will try to do anything to help them, and even after Jonathan's death, Speedwagon remained friends with Erina out of respect for Jonathan. Speedwagon takes care of Erina and Joseph Joestar much like a father figure or close uncle. Equipped with a courteous nature, he is familiar with giving one's privacy; this is apparent when upon trying to enter Jonathan's room, he witnesses the nurse, Jonathan's former love Erina, nurse him back to health and leaves Jonathan to Erina's care. This righteousness would be a characteristic of him throughout his life, as an elderly Speedwagon specifies in his will that his foundation should be used to fund medical and archaeological advancements, and his organization aids the Joestar family time and time again long after his death. Apart from that, Speedwagon is both anxious and hot-blooded. He is very extroverted and loudly conveys his feelings, from enthusiastically describing Jonathan fighting, to his despair at seeing Kars become the Ultimate Lifeform. Speedwagon constantly seeks to help his companions in various more or less convoluted ways. He notably breaks into a hospital to emotionally support Jonathan, harasses Zeppeli so that he would teach him the Ripple, and has thought of using the warmth of his stomach to unfreeze Zeppeli's arm. Speedwagon also has often tried to confront zombies.