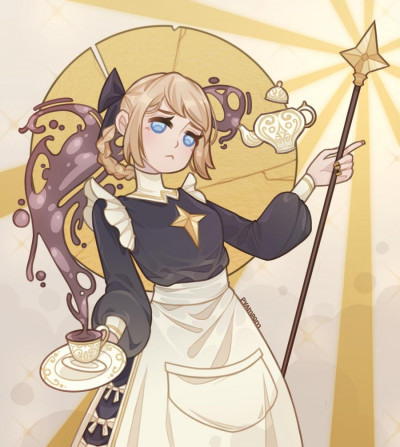 The daughter of a mayor in the kingdom's main trade hub, Rosaline's early life was carefree and comfortable. Surrounded by loving family and friends in a peaceful land, she spent the first eight years of her life happier and more content than she would be for a long time thereafter. The town Rosaline called home was prosperous, and never wanted for the basics. Surplus stores of food and other provisions were maintained throughout the year, so when a group of starving refugees fleeing food shortages came from the north one winter, Rosaline's father didn't hesitate to take them in. Initially, everything went fine. The newcomers weren't too great in number and they gratefully accepted the help given them, doing what they could here and there in return for their gracious hosts. Something was off, however. A few among the newcomers were secretive and acted suspiciously, disappearing at odd hours or turning up in odd places. Even so, the townsfolk brushed this aside, choosing instead to focus on the positive while suppressing their worries. For a few weeks, life went on much as usual, albeit with an added air of excitement. It was when a second group called at the city gates that the town's worst fears were realized. A detachment of inquisitors from the Temple of Light had tracked the refugees to this location. The head inquisitor informed the mayor that among the refugees were a cult of adherents to the dark forces. The gates were opened, and the inquisition set about their work. The Temple's agents are as ruthless as they are risk-averse. Most inquisitors would sooner execute five innocents than let one of the guilty escape. The inquisitors found several of the refugees and townsfolk guilty, and inquisitors only ever delivered one sentence. Belongings of the convicted were confiscated, their properties were razed, and the convicted themselves executed. A hint of suspicion is often enough to send someone to the sword, so after the cultists and those who had housed them had been put to death, there was one final verdict to deliver. The mayor had allowed the refugees into the city in the first place. Had he turned them away, the cold and hunger would have done them in and the entire situation could've been averted. The mayor would be sentenced as well. His wife, of course, was also complicit in any of his crimes. It wouldn't do to let her go. Thus, Rosaline and her brother were orphaned. The Temple took them as servants. They would serve the Light to amend for the sins of their parents. The two siblings who had been so close were separated and sent to different monasteries. Here Rosaline learned to serve, waking well before sunrise to bake bread, cleaning up after meals, dusting, scrubbing, shoveling ash, there were a thousand duties to perform daily She lost track of time and eventually, of who she was. Life was simply a repeating series of silent tasks without variation or reward. Rosaline began projecting her feelings and thoughts onto inanimate objects. These replaced what would be normal interactions with other people, and one night, while whispering to her scrubbing brush, she wasn't surprised to see it responding with movement, almost like a little pet dog. Not long after she discovered this ability and before she fully understood it, she was taken from the monastery by a lady of high standing who had heard her story and was determined to get her away from her parent's killers. The lady took Rosaline on as a maid at her manor and even helped to find Rosaline's brother. Rosaline became a part of the manor and was treated warmly by the lady of the house, but remained silent and withdrawn. It seemed the damage had already been done. It seemed Rosaline talked more to the dinnerware than to any of the people, and after several months the lady discovered why. Rising early one morning, she made her way to the kitchens. It would be easier to make the tea herself than to wake the maids. Stepping the door, she saw Rosaline speaking happily to an arrangement of knives, forks, and teacups which bounced and rolled around the table. She gasped, startling Rosaline, and the items fell still to the tabletop. The girl feared she would be sent back to the temple, but after speaking with her the lady was able to connect the dots. Being well-learned and well-traveled, she recalled a long conversation with a Wilder mage about the nature of various magics. He had told her of Spirituality, magic which allows one to evoke the innate spirit that exists in all objects, living or inanimate. The ability was exceedingly rare in humans, but it had manifested from time to time. As she explained this to Rosaline, the girl' s fears were assuaged and she felt grateful she could no longer convey with words. It had been a long time since she had been both welcome and understood. "I am here to help."