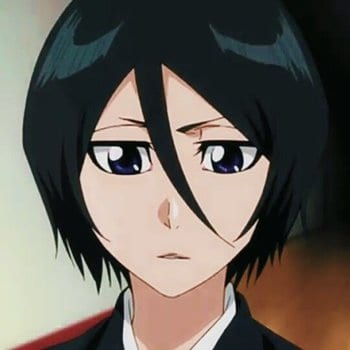 Rukia Kuchiki is the current captain of the 13th Division. She formerly served as lieutenant of the 13th Division under Captain Jūshirō Ukitake. Rukia is the adoptive sister of Byakuya Kuchiki, a friend of Ichigo Kurosaki, and is married to Renji Abarai. Short and petite, Rukia has light skin and purple eyes. Her hair is black, with several strands of hair always hanging between her eyes. Byakuya has stated she strongly resembles her sister, Hisana Kuchiki. As a Shinigami of the Gotei 13, Rukia wears a standard shihakushō. 17 months after Aizen's defeat, Rukia wears her hair cropped into a bob which hangs about her face. She wears a fingerless white tekkō, similar to Byakuya's, which extend above her elbows. As a lieutenant, she wears her Division Badge around her uniform's left sleeve, which has been shortened to just reach her upper arm. Ten years after Yhwach's defeat, Rukia's hair is in a style similar to the time before Aizen's defeat, but much longer. She also now wears a typical captain haori over her usual Shinigami shihakushō. Twelve years after Yhwach's defeat, Rukia wears her long hair in a sideways ponytail. Initially born into a lower class, Rukia retains her modesty, even as an adopted member of the nobility. She is graceful and "clean", yet chooses to talk to ordinary people. However, her cool and lone demeanor often forces her to hide her personal troubles, even from her friends. According to Ukitake, Rukia never opens up her heart, and has difficulty making friends. Rukia is clueless about the ways of the modern Human World. She is very good at acting, having acted her way through a number of tough situations, such as getting out of trouble with school teachers and convincing the Kurosaki family to let her stay at their house. Rukia always has trouble finding clothes that fit her, especially when inhabiting a Gigai in the Human World, leading to her stealing clothes from Ichigo's sister, Yuzu. She likes to climb to high places. Rukia likes everything rabbit-themed, and becomes quite sensitive when someone insults her obsession with them. People often have difficulty understanding her drawings, which are typically rabbit-like, and doesn't like it when people complain about their quality. Rukia's favorite foods are cucumber, eggs, and rice dumplings.