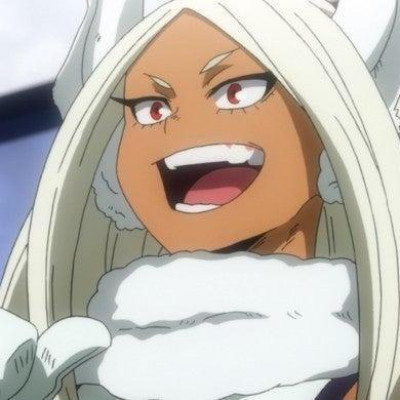 Rumi Usagiyama, also known as Rabbit Hero: Mirko is the No. 5 Pro Hero. Rumi has an athletic build with muscular arms and legs, who stands slightly below average height. Rumi has dark skin, red eyes which are tilted slightly inwards, long eyelashes, and straight white hair that used to reach down past her waist, but she had later cut short. On her head, she has a pair of long white rabbit ears pointing upwards with a slight crook. Along with these, she also has a white round tail, which gives her overall design a definite resemblance to an albino rabbit. Her hero costume consists of a sleeveless white leotard with dark purple trim around her shoulders and waist, a wide yellow crescent moon design over her chest, and a single thick metal plate wrapped around her midriff. She wears purple thigh-high boots to compliment her leotard, with more plating around the heel and toe areas, making her feet look like those of a rabbit. She also has a pair of thick white gloves on her hands with long cuffs, sporting small triangular protrusions around their edges. During the Jaku General Hospital raid, her left forearm was crushed and her right shin was stabbed by the High-End Nomu, while the tip of her right ear was sliced off. In the aftermath of the War, she now possesses a prosthetic left forearm and right leg, which are interchangeable in case they get destroyed. Rumi is tough and speaks her mind, even if it causes confrontation, and she respects those who do the same. Rumi seems to believe that heroes who join teams are cowards, as they could just be relying on their teammates' strength rather than their own. As a hero, she proves to be very fearless and independent, freely traversing Japan while bravely facing any villain she comes across. Despite her brash demeanor, Rumi isn't above assisting others as she came to the aid of Endeavor and Hawks after seeing their battle with Hood on the news. She also requested Endeavor's help while fighting a villain on one occasion, showing that she isn't unwilling to ask for help from other heroes despite her solo disposition. Rumi embraces life-threatening situations with a bright grin and is constantly searching for the next big adrenaline kick, smiling in the face of danger. She does not back down, even when she is overpowered by stronger enemies, claiming to only be getting warmed up. Rumi also appears to take every day of her life with no regrets, admitting she'd risk her life for the greater good. Her great devotion and bravery even earned her the respect of Endeavor, who vowed to finish Rumi's work and defeat the villains in her stead when the Rabbit Hero was left unable to fight. Rumi is capable of enduring extreme pain without losing focus and faces her own wounds reluctantly. She is pragmatic and quick thinking, as she binds off her bloodstream with her own thick hair, to keep fighting without her arm.