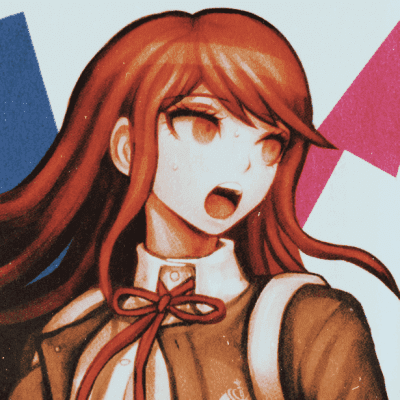 Ryōko Otonashi (音無 涼子 Otonashi Ryōko) is the protagonist of the Danganronpa Zero novel series. She is a fake identity of Junko Enoshima, an amnesiac version of Junko. While she has a rather eccentric way of thinking, she has no hunger for despair. She is in love with Yasuke Matsuda, her doctor, and the only person she can remember more clearly. Despite being amnesiac, she still has the talent of the Super High School Level Analytical Prowess (超高校級の「分析力」chō kōkō kyū no “bunsekiryoku”). Ryōko stopped existing by the end of Danganronpa Zero, as she regained her memories and returned back to her original persona. Ryōko appears as a cameo in the 30-minutes long OVA, Super Danganronpa 2.5: Komaeda Nagito to Sekai no Hakaimono as a part of Nagito Komaeda's imagination world. Ryōko is a teenage girl who is around 17 years old. She has dark red eyes, matching the color of her long, disheveled hair. She wears the standard school uniform of Hope's Peak Academy: a white blouse with a red ribbon, an unbuttoned dark grey cardigan with the logo of Hope's Peak Academy emblazoned on it, a short dark grey skirt, white knee-high socks with part of the Hope's Peak logo near the top edge, and brown loafers. Ryōko is presented as a girl with a psychological disorder which causes her to lose her short and long term memories. Because of this, she writes everything down in a notebook, the 'Ryōko Otonashi Memory Notebook'. While she has lost her ability to form new memories, she still has her ability to remember or learn 'procedural memory' tasks such as writing and reading. Ryōko is generally carefree, with "natural cheerfulness". She has a rather eccentric way of thinking, which is not caused by her disorder, and she has a strange laugh. Because of her forgetfulness, she has trouble concentrating and may come across a bit dumb in other people's eyes. She may often appear uninterested and lacks a proper response. Due to her quick memory loss, she feels that she is "uninvolved with the world" - at times she barely cares about anything that doesn't concern her or Yasuke, believing that things have nothing to do with her because she can't remember them. She uses this as a defense mechanism when in stressful situations. Yasuke is the only person she remembers more clearly, though it's only about her feelings towards him instead of any events, and because of this she thinks about him almost constantly. While he is rude towards her, she is grateful because he doesn't treat her with fake sympathy. She isn't worried about her condition either, because she doesn't have anything to compare to due to her memory loss and she sees her forgetfulness as a part of who she is instead of a disadvantage. A sudden cure would be a bigger worry for her, because it would mean separation from Yasuke. Ryōko can't actually remember her Super High School Level Talent, but in times of peril she shows near supernatural analytical skills. At the times, she also appears to revert back to her Junko Enoshima persona, though only for short amount of time. Sometimes, Ryōko can hear Junko's voice and remember things about her, but she doesn't understand the connection between the two of them. Despite being an amnesiac version of Junko, Ryōko has no hunger for despair and she is disturbed by killing and violence.