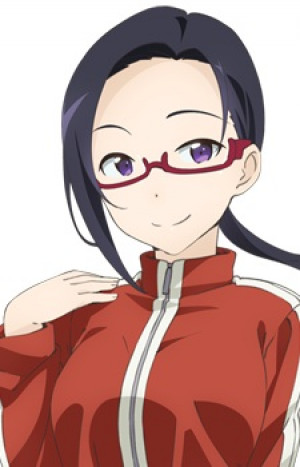 Sakie Sato is a main character in Demi-chan wa Kataritai. She is a Mathematics teacher who also happens to be a Succubus. Similar to her students, her Demi-human origin has several repercussions in her ability to fit, and perspective of fitting into a normal life. Sakie is an attractive young woman with upper-back length black hair that is tied in a low ponytail with bangs swept to the right side, purple eyes and a large bust. She is most frequently seen wearing a red track suit and glasses; the tracksuit is to obscure her figure. When her glasses are off and her hair is down, Sakie (according to Tetsuo Takahashi) has increased sex appeal. Additionally, it seems she avoids getting contacts as her glasses help obscure her face. Being a succubus, Sakie's body produces an aphrodisiac pheromone. Much to her dismay, this effect inadvertently makes any male in her vicinity lust over her. Unlike traditional depictions of succubi as highly confident and driven, Sakie is timid and shy, taking precautions to minimize her contact with - and appeal to - men around her. Sakie comes off as socially awkward, as she avoids being within 4 feet of males if she can help it. She highly admires Tetsuo Takahashi for his self control despite the apparent effect of her aphrodisiac, to which most males, even her students, succumb. Being a teacher, she constantly puts her students' well-being first and foremost. Kind, gentle, caring, and somewhat clumsy by nature, these qualities present the image of an ideal wife to most men, amplifying their attraction towards her and further increasing her self-consciousness. As a result, Saki wondered if she tried dating, would the attraction be solely on her looks or who she was as a person? A conundrum that haunted her thoughts for years.

No images found
Want to see more from the gallery? Register or Login
teacher succubus glasses