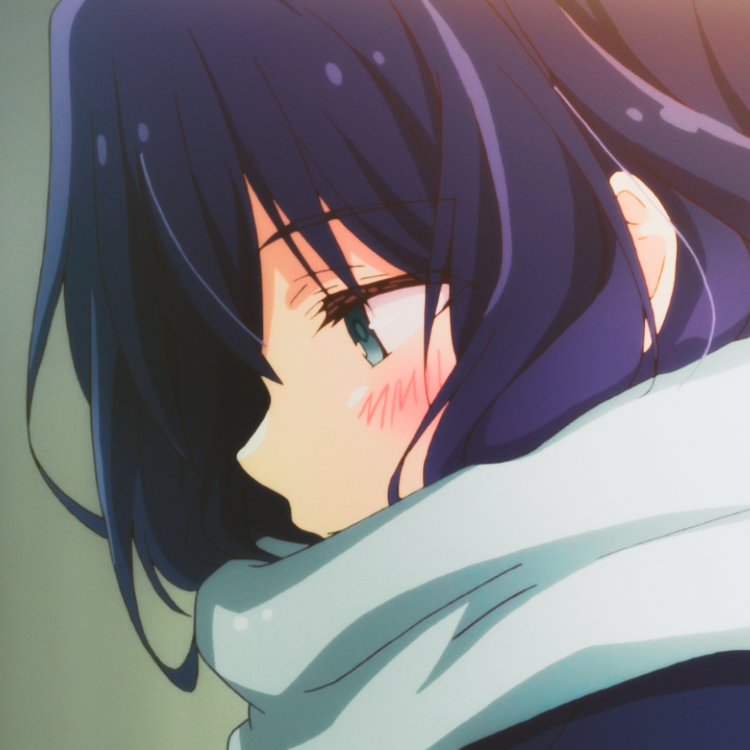 Sakura Adachi is a high school student. She is found skipping class on the second floor of the gym by Shimamura Hougetsu one day. The two of them gradually became friends and began to spend a lot of time together. Adachi has collarbone length hair that is light brown in the light novel and a greyish color in the manga. She has light grey/blueish eyes in the manga. Adachi is taller than Shimamura. In Volume 08, Shimamura believes that the gap in their height has increased overtime. Whenever Adachi works her parttime job at the Chinese restaurant, she wears a traditional Chinese dress that shows off some of her thigh. She later purchases one for herself because she knows Shimamura likes her in that outfit. During the Flash Forward sequences, Adachi has grown out her hair, and Shimamura believes Adachi gained a more mature look. Adachi had an extremely introverted personality. Because she was reluctant to speak her mind or tell anyone how she feels about anything, no one was willing to understand her, including her mother. Before meeting Shimamura, she never had someone whom she can call a friend. Adachi was said to be cold toward other people which caused her to become alienated, and she didn't attempt to make friends with other people. The 'what if' chapter in Volume 05 illustrated Adachi having difficulty developing communication skills from a young age which further led to her social isolation later in life. Flashbacks indicate that Adachi's cold home life harmed her development. While others thing she is cold an aloof, Adachi craves to be treated with affection and kindness. As a result, Adachi quickly became attached to Shimamura. Due to her poor social skills, she tends to take her desires too far. However, Adachi also displays that she takes commitments seriously. At the beginning of the series, Shimamura describes Adachi as having a 'resting bitch face' which contrasted with how laid-back and easygoing she generally was. She also observed that whenever Adachi got angry she never raised her voice. Shimamura's friend Tarumi as well as a former classmate of Adachi's from middle school would make similar observations. In Volume 03, Adachi thinks that meeting Shimamura has caused her to change into a more optimistic person, but she also believes it made her into a 'dumber' person as she lacks the ability to fully express her feelings. This further indicates that Adachi regularly puts herself down. As the series progresses, Adachi's attachment to Shimamura grows which showcases that she generally gets easily jealous when she sees Shimamura spending time with others. In Volume 04, Adachi is quickly overwhelmed with jealousy when Shimamura easily makes temporary friendships with their new classmates which results in her being unable to talk to Shimamura and ended up running away. While she attempts to overcome some of her issues to stop herself from running away, she has more difficulty overcoming her jealous attitude. She has come to understand that acting this way isn’t healthy, and she has attempted to rectify that. Adachi attempts to be more considerate of others, especially Shimamura. While she prefers talking to Shimamura on the phone, she'll instead send a text asking Shimamura if it is okay to call her. When it comes to planning things, Adachi tends to either try doing things in a roundabout way or she over plans to the point she doesn't think it entirely through. During Valentine's Day, instead of asking Shimamura if they could exchange chocolate, she tries to plant the idea in Shimamura's head. After they start dating, Adachi over plans on aspect of their date, and she later realizes she didn't plan anything else out. In the Flash Forward sequence in Volume 08, Shimamura acknowledges that Adachi's social circle has increased a little over the years, but only a little. She also is a little calmer, but Shimamura is still able get her flustered, such as hinting at Adachi that she 'accidentally' wore one of her undergarments.