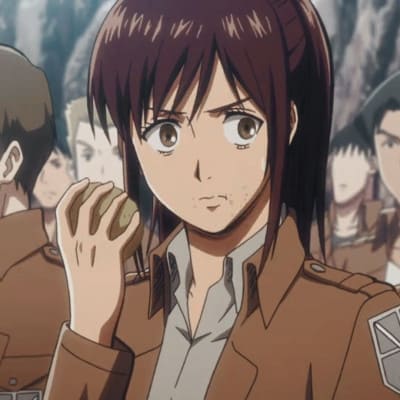 Sasha Blouse was a member of the Survey Corps and one of the few former members of the 104th Training Corps, of which she was ranked 9th best, that decided to join the regiment, upon coming into contact with Eren's strong desire to eliminate the Titans. A compulsive food hoarder with an overly polite way of speech, Sasha was from Dauper, a village in the southern territory of Wall Rose. Sasha was a young woman with light gold eyes and brunette hair originally kept in a ponytail that reached the base of her neck. Her bangs were slightly parted to the left, cascading down each side of her face and stopped around the middle of her neck. On missions, she wore the standard Survey Corps uniform with a light gray shirt underneath. When not on missions, she wore a simple long sleeved blouse with a skirt that slightly covered her boots. On some occasions, she even wore a sleeveless vest over her blouse. She had a slender figure and was of average height. In the year 854, Sasha had grown taller and her hair was cut shorter with longer bangs, exposing more of her face. While in Marley, she wore the black Survey Corps uniform with support belts for her vertical maneuvering equipment along with a rifle. Sasha was a friendly, fun-loving girl with a compulsive appetite. Originating from Dauper Village, she had a local accent, but actively hid it out of embarrassment by using formal speech, even when conversing with her fellow trainees. Initially, Sasha was shown to be somewhat timid and prone to make mistakes when under stressful situations. She was rather simple-minded and eccentric, but her intuition was very sharp. Sasha was also surprisingly courageous, and she was considered a wise judge of circumstances and danger. Before she matured and entered the military, Sasha was shown to be rather intolerant and close-minded. She only cared about herself and her village, and was very aggravated by all of the people from Wall Maria coming in and hunting all the game they once hunted. Additionally, she refused to change their traditions for the greater good. Possibly due to her younger years of struggling to hunt and find food, Sasha had developed an incredible appetite; eating provides her with considerable gratification and relief, especially during times of great stress, and food was often the only thing on her mind when at ease. So compulsive in her desire to eat, she had proven willing to steal food from the infantry stores and/or kitchen and earned herself the nickname "Potato Girl" after stealing a potato and absent-mindedly explaining herself when her superior caught her. Despite her gluttonous tendencies, Sasha was a capable soldier and could not stand by when others are in trouble. In the year 854, Sasha had adapted to her role as a sharpshooter, agreeing with Jean that, as time has passed, killing other soldiers had become easier. Despite her newfound cold professionalism in the field, Sasha still appeared to be incapable of killing civilians and especially children, exemplified when she had Gabi Braun in her sights yet could not take the shot, resulting in her death at Gabi's hands.