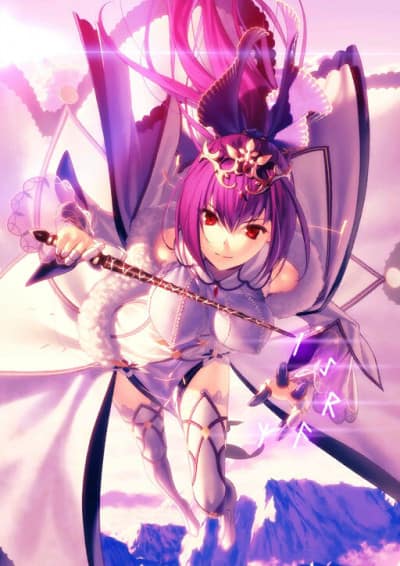 Scáthach-Skaði (Scáthach-Skadi), Class Name Caster, is a Caster-class Servant appearing in the Grand Orders of Fate/Grand Order. In this current world, she does not have the face of a mentor capable of raising a warrior. She is not a master of martial arts, either. Unlike the Lancer Scáthach who was more approachable, "Did I step on something", "Oh, what a young one (human)", and "Should I welcome you, or should I kill you" are just what makes up the properties of nature (gods). “Blow a breath. Be like a blizzard. And living beings will die.” “Smile. Be like the eternal spring. And life will sprout gorgeously.” Both, are equivalent to her. The Formidable Queen. The Goddess of Ice and Snow. However... While ruling over the Lostbelt, she felt sorrow in her heart as "someone left behind", but she hid it away. She was a goddess beloved by the other gods and continued to be a suitor, but after the gods perished at the climax of Ragnarök, she became "the last Scandinavian God of the Lostbelt". Therefore─── Actually, she is proportionately tough. Actually, she is proportionately pure. Actually, she is proportionately warm. If one deepens their relationship with her, they will begin to see a face unlike a queen... they will see her true personality. She was neither a god nor a ruler. Even if her title "the Mother of Scandinavia" falls off, she is still a girl. Her "Chaotic" alignment is self-proclaimed. When she ruled over the Scandinavian Lostbelt, her original purpose was for social order, but it is now different when she was reborn as a Heroic Spirit, or so it is said.