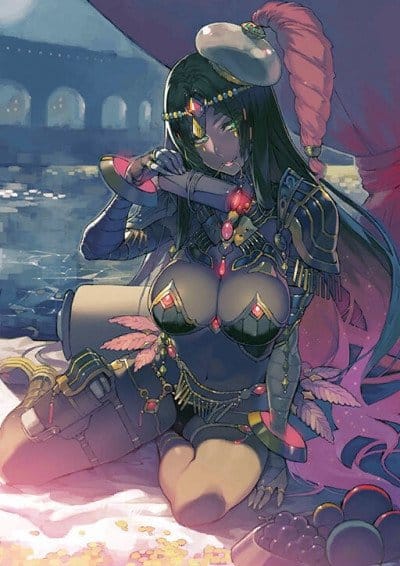 Scheherazade, also known as Caster of the Nightless City, is a Caster-class Servant summoned by Ritsuka Fujimaru in the Grand Orders of Fate/Grand Order. A gloomy, quiet and calm female storyteller. Scheherazade is clearheaded, composed, and is of the outstandingly cool-type of person, but that is not a harsh coldness. It is not an icy coldness, but a coldness like that of the moonlight. Because of her trait where she “observes, perceives and understands all of the kings she serves” (for the sake of her own survival), she has a high aptitude in being a prime minister. She primarily advises to the king, and reducing the physical and mental stress of the king is her greatest special skill, but if it is by all means necessary, she can also suggest military advice to her Master in a Holy Grail War. Although there is a feeling where she wants to be her lord’s strength, Scheherazade’s fundamental strategy is “to protect her lord’s life while also protecting her own life”; in other words, she basically tries to choose and have herself conduct a stratagem that would produce the biggest military gains at a low degree of risk. Scheherazade states that rather than the battlefield, she is more suited for the Master's room. Her experiences have given her a fear of death and she hates the Servant system which would cause her to repeatedly experience it. In life, Scheherazade was a brave woman who voluntarily took part in her father's plan to stop the madness of King Shahryar. However, as time passed where she tried to prolong her life, Scheherazade grew more fearful of death as she could easily be killed by the mad king on a whim. In the end, despite how King Shahryar eventually became sane and Scheherazade ended up surviving the ordeal, Scheherazade was deeply traumatized by the tribulation that caused her to fear death even as a Servant. Because she always regards the avoidance of her death as number one, Scheherazade’s compatibility with a Master who treats her as someone disposable is bad. In that case, she would easily betray them and search for her own survival route.