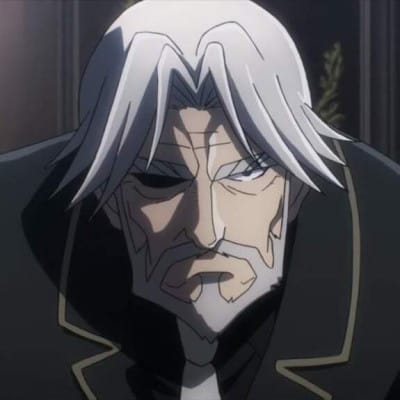 Sebas Tian is the head butler of the Great Tomb of Nazarick with several manservants and other butlers under his command. He was created by Touch Me. He is also the leader of the Pleiades Six Stars. Although he is not one of the Floor Guardians, his power closely rivals theirs. In a way, he is independent of their chain of command. He originally served as Nazarick's last line of defense alongside the Pleiades on the 9th Floor, to give time for the guild, Ainz Ooal Gown, to prepare for their final stand in the Throne Room. In his human form Sebas Tian has the appearance of an elderly butler and he is dressed gracefully in his traditional black uniform. Sebas' hair is entirely white, just like his immaculate beard. He has visible wrinkles on his hollow face, which makes him seem gentle in appearance, but his eyes are as sharp as an eagle's. However, in the manga, his beard is longer, his shoulders are not as broad, and his face is also older. Like his creator, Touch Me, Sebas Tian has a great deal of personal justice. Unlike many other denizens in Nazarick, he does not completely despise humans or see them as inferior creatures. Instead, he believes that some humans are good people and it is the duty of the strong to protect the weak. However, humans with an ugly nature disgust him and he will not hesitate to kill anyone who dares to oppose Nazarick. Sebas also tends to question his own actions whether it was right or wrong of him to do them contrary to his master's order. Not sure why he does it, Sebas does believe that Touch Me's will is what encouragingly motivates him to act the way he does and that it conflicts with the will of his current master. Although Sebas is stoic in nature, the thought of being executed as a traitor to his master terrifies him the most. He gets extremely nervous whenever his loyalty to Ainz is called into question. When encountering humans who are not purely motivated by personal gain, Sebas believes this is the reason why he cannot bring himself to hate humanity. Sebas believes that it is wrong to cast out a pitiable existence simply due to possibilities of risk. Because of the conflict in his personalities mirroring Touch Me, like Demiurge to Ulbert, the two NPCs do not appear to get along very well with each other, as their characteristics are polar opposites. According to the author Maruyama, the reason behind why Sebas has quite a decent personality is due to not having any settings written by his creator at all. He even noted largely that because he is a blank-slate character, the number one NPC most influenced by their creator was particularly Sebas. He is kind and friendly toward humans. Sebas acts heroic in what he does, looking and wanting to help as many people around him as he can. If he sees someone in trouble, Sebas will go out of his way to lend a hand until it is done from start to end. Sebas admits himself to being sympathetic to whoever is in a bad situation, choosing to stop by and save them from harm without hesitation despite having to face other conflicts of his own along the way. He also delays his duties and missions a little longer to take care of lesser important matters like those first. Nevertheless, Sebas has no intention of saving those who only pray for others to extend a helping hand. However, he will go forth to help anyone like Tuare out in their hour of need if they are struggling and striving to live.