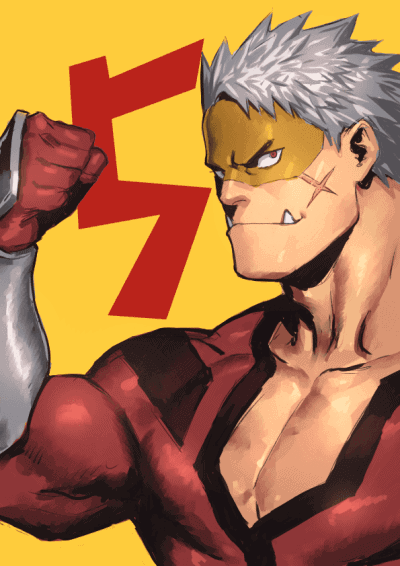 Sekijiro Kan, also known by his hero name, Blood Hero: Vlad King, is a Pro Hero and the homeroom teacher of U.A. High School's Class 1-B. Sekijiro is a very tall, wide-set man of a bulky, muscular build, with lightly tanned skin, a few visible scars showing on his left cheek and the left side of his notably thick neck. He has short pale gray hair which is spiked upwards, away from his face, the only exception to this being the small clump of hair which hangs down over the left of his forehead. His eyes are very small and thin, and he has a wide mouth with two prominent lower canines, which appear even when his mouth is closed. His hero costume consists of a dark red skin-tight suit with a very low u-shaped collar, which exposes the middle of his pectoral muscles and is lined with a thick black trim, which matches the ones over his shoulders. He wears white over-the-knee boots and thick vambraces over his lower arms, a thin wire snaking from one of the two small protrusions on the left one to the back of his neck, and red gloves. Around his waist, he has a three-piece metallic belt which dips downwards in the center, and he wears an orange mask over his eyes. As a teacher, Sekijiro has a caring attitude towards his students. He is willing to go out of his way to protect them and encourages them to do their absolute best. He also views Class 1-A as rivals but also values their growth and safety. He often uses them to motivate his own class to reach greater and greater goals. Although he cares for Class 1-A's well-being, he has shown to have a comical bias towards his class, shown in the training. He is one of the few people who knew about All Might's true form. After it is revealed publicly and crime begins to increase, Sekijiro regrets not being able to do more for All Might while he was acting as the Symbol of Peace. He also showed concern for Shota Aizawa in their televised meeting with the media, showing that he cares for his fellow teachers as well and will do what he can to help them, even if he does not interact with them often. When danger strikes, he is quick to react, using his Quirk effectively as a method of entrapping an enemy. He gets along well with Hound Dog and they have been friends for a long time.