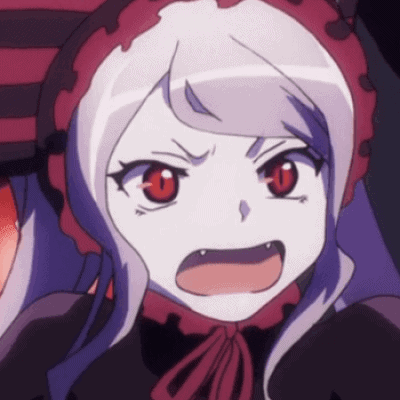 Shalltear Bloodfallen is a true vampire and the Floor Guardian of the first to third floors in the Great Tomb of Nazarick. She was created by Peroroncino. Shalltear is a vampire of short stature and has the appearance of a buxom fourteen-year-old girl. Described as a true beauty, she has pale shiny skin, seductive crimson-red eyes, and fine facial features. Shalltear's silver hair is tied in a ponytail through a large ribbon on top of it all, allowing others a full view of her face. Shalltear wears a soft black evening dress with a big heavy skirt. Her upper body is dressed in a lace embellished ribbon and a short tailored jacket. Her hands are donned with long lace gloves, not exposing any bit of skin exterior. However, her breasts are fake and are completely flat, similar to a boy's. She covers this up by using an excessive amount of breast pads. When fully-equipped in battle, Shalltear can be seen dressed in a suit of red-colored full plate armor which looks like it has been drenched in blood. She wears a swan-shaped helmet that leaves only her pale face exposed. There are also plumes of avian feathers attached from either side of the helmet she wears. Additionally, the chest and shoulders of her armor have been styled into the shape of wings. She also has a crimson skirt-like armor covering her lower body. In her True Vampire form, her appearance changes drastically. Her mouth becomes a gaping circular maw, not unlike a lamprey's, with a very long tongue hanging out. The shape of her eyes becomes quite inhuman and they glow brightly. Her form becomes hunched over and somewhat simian, with deadly claws on both her hands and feet and an eerie aura surrounds her body. In this form, she wears a much simpler raggedy dress. Shalltear has a very flirtatious personality and is open with her sexual preferences, often to her peers' discomfort, including her master Ainz. So far, she has displayed a preference for necrophilia, sadomasochism, and bi-sexuality. For that reason, Shalltear tends to make sexual advances towards undead like Yuri Alpha, who tries to avoid her as best as she can. However, she dislikes rotting corpses. Despite her apparent shamelessness and honesty, she can be quite innocent about certain things. Shalltear also happens to be quite sensitive about her petite figure, which she attempts to cover up by using breast pads. Furthermore, she tends to easily misinterpret the old sayings of the 41 Supreme Beings and takes them out of context. As a true vampire, Shalltear is extremely proud and takes her position as a Floor Guardian very seriously. Yet, at the same time, she has no patience or tolerance for failure and will often burst into fits of rage at the sign of an unfavorable situation occurring. Shalltear will not hesitate to kill any servant who disappoints her. However, she will not punish others for failing in tasks that are impossible to begin with. When Shalltear fails a mission, she tends to fall into a state of depression and can become very reflective of the sins committed by her. In fact, she believes that her crime must not go unpunished, feeling guilty of the terrible things she has done to cause Ainz trouble. Shalltear is completely loyal to Ainz and, in a romantic sense, is also considered to be the love rival to Albedo for his affections. She takes great joy in being able to prove her worth and fantasizes about the praise she expects to receive from Ainz. When a situation doesn't go in her favor, Shalltear fearfully panics about the scolding she believes that she will get by him. However, she seems to have a taste for enjoying the punishments Ainz orders her to do like being his chair to sit on. After learning from the mistakes from her last mission, Shalltear begins to act more vigilant and careful of the environment around her, planning precautionary measures accordingly based on the kind of situation she is in. On the other hand, she tends to be quite a playful girl towards her opposition to the point of chasing after them for the fun of it after they develop a fear of the former. She will incite a few mind games with them for as long as possible before finally deciding to go through with either capturing or finishing them off for good. However, she can lose control of herself when she is splashed with too much fresh blood after murdering her victims in cold blood. She also feels deeply unease and frustrated with herself whenever other Nazarick denizens don't seem to bear any trust of her for the job. She wants to prove herself useful to not only her master Ainz but to also everyone in Nazarick who lost faith in the former as atonement for betraying their trust.