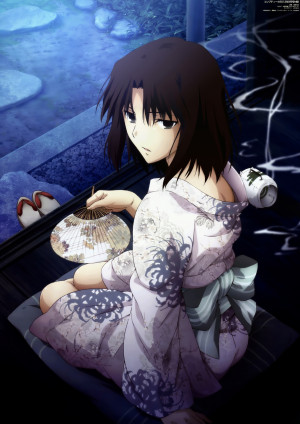 Shiki Ryougi is the main protagonist of Kara no Kyoukai. She is a girl who possesses the Mystic Eyes of Death Perception, a supernatural ability that allows the user to see the inherent mortality of everything (both living and non-living) in the form of lines. She assists the Garan no Dou agency in handling paranormal cases when combat is required. Shiki has always mostly worn a wide variety of traditional kimonos ranging from colorful yukatas to high quality furisodes up to the age of sixteen. Despite being seemingly unremarkable, her kimono is a luxury item not apparent to the eye. The quality is revealed in the fine details, the haute couture being that she can perform high kicks while still wearing a kimono. She can’t actually distinguish between different Kimono types, but because she’s been in contact with nothing but high-class goods her entire life she can at least tell the difference between “good” and “bad”. At the kimono fabrics shop, she’ll pick out a material without hesitation and leave, at which point Akitaka will look at the price only to find that it costs as much as he makes in two months. Though she had received clothing from Akitaka that would suit a girl her age, she never bothered to wear them, and because her school was one without uniforms, she stayed with her kimono. She wished to utilize a long-sleeved kimono, but instead wore a Yukata-like, single-piece kimono for ease of changing during physical education classes. Comments from her high school peers and prodding from Mikiya about her insistence on simply wearing extra clothing on top of her kimono caused her to spontaneously decide to wear something over it. She decided to buy a leather jacket, so she began a strange habit of wearing a leather jacket over a kimono during winter. Her hair is short, and while she often used to brush her hair, it was usually unkempt after her recovery from her 2-year coma. Shiki has ink-black hair, pale skin color and black eyes described as being of "clear void". While she was known to wear wooden geta footwear as part of her casual wear, she commonly wore boots with laces as part of her default attire, especially when embarking on her assignments under the Garan no Dou agency. While it seems that she is concerned about her attire, she does not actually care. She simply wears what she wishes, but the result ends up consistently being a kimono, laced-up boots or geta, and a red leather jacket. Her favorite outfit is the red leather jacket, but only Mikiya is oblivious to the reason as to why she loves it. She does not favor any particular red leather jacket, and insists that "I will switch to a new one if this one gets worn out". After the case at Reien Girl's Academy was wrapped up, Akitaka was entrusted with the Reien uniform's safekeeping. In several years, he quietly and discreetly passed it on to Mikiya. The original concept behind Shiki was "a juxtaposition of Eastern and Western concepts", or literally "an unhomogenized compromise between the East and the West." Pre-coma, the two personalities Shiki and SHIKI wore the same style of dress with the latter often being depicted as wearing kimonos of various warm colors. Shiki's third personality 「Shiki Ryougi」 was often depicted as having worn a light pink kimono of the furisode variety, all while lacking her signature red leather jacket despite only ever being seen during snowy nights. 「Shiki Ryougi」 was known for displaying a serene and trance-like expression in all of her appearances. Children born into the Ryougi family are generally male and are artificially induced with dual personalities, but Kaname was unable to manifest a second personality of his own. Shiki was confirmed to display the trait instead and was raised as the family head in his place, displaying the personalities of SHIKI, a male personality customarily called the "yang" personality, and Shiki, the female personality called the "yin" personality. It is not the result of Dissociative Identity Disorder even though it is a dual personality, so it is more a matter of whose actions take priority. It is easy to tell which Shiki is speaking at a given time because they both have a distinct style of speaking, most notably that the female Shiki speaks politely and with reserve, referring to herself with the gender-neutral pronoun watashi, while the male persona has a brash personality and refers to himself with the masculine pronoun ore. The two personalities could not communicate to each other but they can both understand what the other is feeling. When one comes out it is like the other goes to sleep, and at the moment they switch they feel each other’s desires.