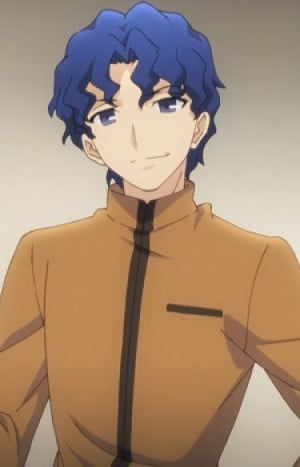 Shinji Matou is the acting Master of Rider in the Fifth Holy Grail War of Fate/stay night. He is merely using the Servant of his adopted younger sister, Sakura Matou due to his inability to use magecraft. He has been a friend of Shirou Emiya for a number of years. He has an open crush on Rin Tohsaka, but she does not return his interest, much to his frustration. Much like his father, Byakuya, Shinji has curly blue hair and gray blue eyes. Due to his hair style looking like a seaweed, he has been given the nickname Wakame. During school, he wears the standard Homurahara uniform. His casual clothing consists of a white and black jacket, a black shirt and blue jeans. When he was young in the manga adaptations, his clothing consisted of a white shirt and suspenders. In the non-canon Carnival Phantasm his hair was messier and wore a red bowtie. Shinji is arrogant and impulsive. Initially he considered himself to be special when he discovered the Matou were a clan of magi and began putting all of his heart and effort into becoming one himself, only to later find they were a fallen clan who no longer had magical power, and that Sakura was going to fullfil his lifelong dream. He also feels entitled to things that he believes both the world and his family denied him, and will do anything to get recompensated. Due to his arrogance and inferiority complex, he refuses to admit that Shirou and Sakura are the only ones that care for him and believes it must be pity instead. Though he is selfish and has the bad habit of looking down on other people, he has some faintly redeeming qualities. He values rules (but he does not follow them himself), and he hates injustice (if he's not the one responsible). Due to the gap between his "ideal world" and the world he actually lives in, his personality has become warped, but when Shirou first made his acquaintance four years ago he was not nearly as bad as he is now. It seems Shinji and Shirou's friendship was close, though Shinji often made fun of him, he socially assassinated anybody that took advantage of Shirou in the shadows. However, for a temperamental genius like Shinji, even a friend of many years is not safe from suddenly becoming his enemy for incomprehensible reasons. Basically, he's the kind of person that's reliable when he's on your side but ends up being really troublesome if he turns on you. Character Material reveals that he is not as haughty as he looks like in the visual novel. After getting involved in the Holy Grail War he becomes overconfident and willing to lash at others with his new power. As shown in the universes when he survives the war, he's back to his more tolerant yet arrogant old self and begrudgingly gives up his pursuit of magecraft after seeing the dangers of it. No fundamental changes in his personality after his near death experience but since a great burden was lifted off his back especially his obsession with sorcery, he will be able to enjoy life as a fussy, loudmouthed, smarter-than-average, troublesome person. Since Sakura eats at the Emiya home, he'd rather eat at some Italian restaurant and flirt with girls than eat in his own home.