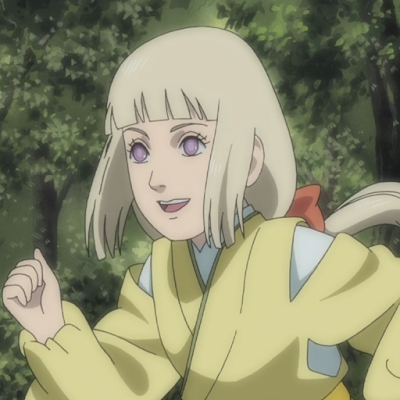 Shion is a priestess from the Land of Demons. She has pale lavender eyes and light blonde hair that falls past her waist, which she keeps tied at the end with a bow. As a formal priestess, she wore a lavender kimono with her hair kept tied back with a golden crown. During her travel with Naruto and his group, she wore a bra-like white top, with a mustard yellow jacket, which looks a little big for her, and red pants cuffing off at the knees. When she releases her power and transforms, her skin gains red markings, her hair turns pink and stands on the end. A blue cloth hovers behind her and covers her arms. Her clothing changes to a thin yellow dress that is nearly see-through. Shion, at first, acted very selfishly towards everyone, believing that she was far more important than anyone — as shown by her lack of care for anyone around her, even her dedicated followers. This was shown in the first comment she made, casually dismissing the fact that many people died for her, by saying that their wish was to leave her unharmed. Having been spoiled from childhood, she was also rather snobbish, complaining about even the smallest of things. Such things were when they had to move around a steep mountain, complaining how uncomfortable Sakura's back was when they were being attacked, or demanding for food only to throw it onto the ground when it did not suit her taste. She also has a sense of dark humour, by teasing Naruto, who was scared by her vision, that he would be killed by being decapitated. Naruto later uncovers the reasons behind her attitude, due to people fearing an appearance in one of her predictions, they would avoid her effectively isolating her like Naruto. Since he himself went through the loneliness and pain of being an outcast from society, he was able to empathise with her. Shion is shown to truly be a kind girl bound by her duty, and her guilt because of her Future Telling. She feels that if she shows emotions, that she would be insulting all those who died for her, resulting in her attitude. After her adventure with Naruto, she changed for the better, becoming more open and kind, and even developing romantic feelings for him. Her love for Naruto went so far, that she asked him to stay and have a child with her.