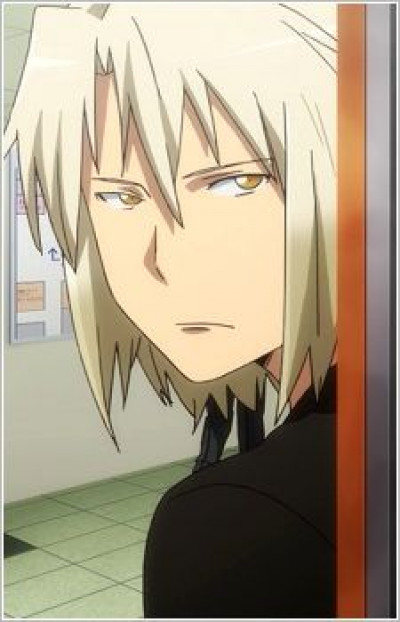 Shirō Ashiya / Alciel is one of Satan's Demon Generals and was also transported to modern day Japan with him. Extremely loyal to Maou, he takes care of the domestic duties at home and goes to the library to research ways for Maou and himself to regain their powers. The Great Demon General Alciel is a black humanoid demon with yellow-brown eyes, long pointed ears, and white-blonde hair that falls to just beneath his chin. Lean and muscular, most of his body is covered in a black carapace that protects the majority of his torso and lower arms, his hands ending in a pair of deadly sharp claws. The upper half of his face also appears to be covered in this natural armor with his eyes still visible through openings like those of a mask, and he sports a large black tail covered in the same substance, the inhuman part visible even from beneath his cloak. His demon general outfit is similar to the attire worn by his master, albeit with a slightly different color scheme and accessories. The outfit consists of a dark jacket with silver around the seams, the bottom partially opened to reveal his waist. He wears black pants with an opening for his tail, and a pair of knee-length boots. Alciel also wears a cape of a dingy green color that is typically worn draped over his shoulders, fastened in the front by a cord, and supported by a pair of simple shoulder pads. In human form, Ashiya loses his demonic features, possessing normal human ears and lacking his carapace and tail. In addition, his body loses much of its previous muscle mass and size, making him appear thinner and shorter, though unlike Maou, he still retains most of his height in human form. On Earth he can often be seen wearing inexpensive UniClo brand clothes, usually consisting of light tan jeans and a black long-sleeved shirt. When doing the chores, he wears a green apron in the same shade of green as his general's cape. Back in Ente Isla, Alciel was known widely as the right hand of King Satan and a master strategist, making him both a trusted adviser and top military commander to the ruler of the Demon Realm. Along with his liege, the Demon General was responsible for many of the atrocities that plagued Ente Isla, sharing his leader's narrow-minded belief that humans lives were meaningless and expendable in the wake of their conquest. He considered demonkind to be the superior beings and openly displayed outrage at the thought of humans attacking his master's domain, showing a strong sense or pride bordering on extreme arrogance. After being defeated by the Hero Emilia and her companions, he flees to Earth alongside King Satan, resulting in the loss of the majority of their powers. Trapped in human form, Alciel is forced to accept his weakness and follow the laws in the new world, dealing a fatal blow to his pride as a demon. While living in Japan, Ashiya has come to accept his rather mundane life, though he still openly laments how low they have fallen since arriving in a magic-deprived world, and tends to consider humans to be beneath him. Due to their lack of sufficient funds and personal comforts, he has taken it upon himself to regulate the spending of his master turned roommate, expressing great discomfort whenever Maou chooses to spend their hard-earned finances. Because of their impoverished state, Ashiya has become incredibly tightfisted, forcibly hiding away whatever money he can while putting a limit on the amount of money that Maou is allowed to spend at any given time. He often reacts in exaggerated ways in regards to the household budget, his strife becoming increasingly worse after Maou invites the other surviving Demon General, Lucifer, to live with them. Due to the latter's love of online shopping, video games, and other expensive luxuries, Ashiya finds himself in increasingly more difficult situations with the trio's living expenses. In addition, his frugality has also become a minor weak point, as promises of monetary reward can be used to coerce information from him, something which Emi Yusa has occasionally used against him. One aspect of his personality that has remained the same is his dedication to the Demon King. Even while living a normal life on Earth, Ashiya respects his lord and is subservient to the point that he will beat himself up for his imagined transgressions when Maou refuses to, and apologize profusely for any perceived ineptitude or blunder. He also continues to refer to Maou as "Your Majesty" even in public and has not lost his tendency to heap praise onto his master, something that the former Demon King finds somewhat embarrassing. While he will follow orders to the letter, Ashiya is not above scolding Maou for unnecessary spending. He has even been shown to lecture his master on both his duties and physical appearance, appearing more like a fussy parent than a loyal servant. Ashiya's intelligence is pointed out by others several times, an invaluable trait that led Maou to suggest he do some research to regain their magic. During Ashiya's time in Japan, it is implied that he and Maou became interested in martial arts genre works of fiction; thus the two apparently have habit of doing martial art poses, especially in cases such as having a quarrel with each other.