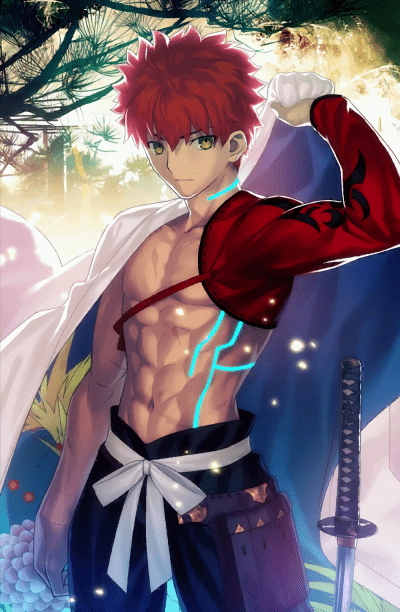 Shirou Emiya is the main protagonist of Fate/stay night who acts as the Master of Saber during the Fifth Holy Grail War. He is the adopted son of Kiritsugu Emiya, the adopted brother of Illyasviel Von Einzbern and the younger self of EMIYA. In the events of Fifth Holy Grail War, Shirou is a teenager with short auburn hair and golden-brown coloured eyes. He is often seen wearing his casual clothing, consisting of a blue and white long sleeve baseball jersey T-shirt and a blue slim straight jeans. During school, he wears his Homurahara Academy uniform but underneath his jacket uniform, he wears the same long sleeve baseball jersey T-shirt. In Heaven's Feel scenario, Shirou gains a new body designed by Touko Aozaki. His puppet body is noted to match his original body closely. He wears a long sleeve shirt with black trousers. In Ufotable adaptation of Fate/stay night [Unlimited Blade Works], Shirou has a lot more variety of clothing. For instance, Shirou wears a black and white jersey zip jacket along with his casual clothing. He wears a charcoal coloured Thomson tartan lambswool scarf along with his school uniform. Other than his casual clothing, he is seen wearing a long sleeve white shirt and a black hooded coat. He also wears a black long sleeve shirt. Due to the trauma he suffered during the great fire, Shirou has a constant emptiness in his personality and suffers from tremendous survivor's guilt. He feels that, as the only survivor, it is unfair to the deceased to prioritize his own needs before those of others. He has a distorted sense of values where he only finds self-worth from helping people without any compensation, feeling that the very act “helping people” is its own reward. He believes it is highly unfair that some people survive and others do not. When it comes down to receiving an injury or even giving up his life to help someone, he will do it without a second thought. The people who see this side of him are often very worried and attempt to correct his behavior, though they are unable to change his opinions. Kiritsugu often talked about how he used strive to protect the innocent from the world's many perils, even at the cost of his own humanity, and how he was saddened by the reality that whenever he was able to spare one life, another person was fated to die. Although Kiritsugu was tormented by his inability to save everyone, Shirou always admired his efforts. Right before Kiritsugu's death, Shirou pledged to be a Hero of Justice in Kiritsugu's place and strive to protect everyone at the cost of his own life. Everything that he is thus far is the result of that very pledge. He has made it his dream to become a "Hero of justice" who will save everyone regardless of what happens to his own life. Shirou pushes his ideals to their limit during the Fate scenario, where he constantly attempts to protect Saber from harm and keep her from fighting other Servants, despite the fact that she is many times more powerful than he and that even his odds of mere survival, not winning, are hopelessly low against those he personally fights. This is because he cannot stand the idea of someone else being harmed for his sake. He never gives up his ideals during the route and injures himself numerous times to uphold it. During the Unlimited Blade Works route, Shirou, through constant arguing with Archer, begins to see the hypocrisy in his ideals. Though he refuses to give them up entirely, he works his way towards a middle ground where he will strive towards fulfilling ideals, despite knowing they are impossible to achieve. He faces his largest dilemma during Heaven's Feel, where he is forced to choose between maintaining his ideals and protecting the life of Sakura. He eventually forsakes them, with the exception of the "Superhero" ending, where he becomes as resolute as Kiritsugu in his prime, allowing Sakura to be executed for the greater good. He strives only to protect Sakura, though he is presented with conflict a number of times. Shirou is extremely stubborn once he sets out to accomplish something, such as spending hours attempting to perform a high jump that is nearly impossible for him. This action, as watched by Rin and Sakura, is one of the initial factors that causes them both to develop feelings for Shirou. He will stubbornly defend his own viewpoints, no matter how wrong they may seem to others, even to the point of causing them great mental anguish. Though he does his best to help others, if he feels that a person brought about their own ruin, he will simply watch instead of helping. He can range from being sarcastic to blunt very easily and his poor convey of body language can make it difficult for others to recognize when he is which, even leading some to think he is being dense or ignorant. Nasu has stated that Shirou and Shiki Tohno would not get along.