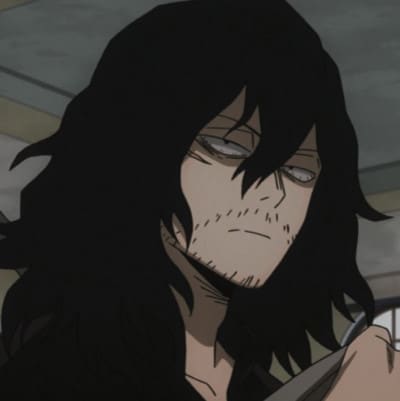 Shota Aizawa, also known as the Erasure Hero: Eraser Head, is a Pro Hero and the homeroom teacher of U.A. High School's Class 1-A. Shota is a slender and tall, pale-skinned man with messy, shoulder-length black hair that partially hangs in front of his face and often half-opened black eyes. He is usually recognized for his worn-out appearance, often having a fatigued appearance. His facial hair remains unkempt, and his eyes almost always looked tired and flat. Shota sports a ragged black outfit that consists of a long-sleeved shirt and matching pants that tuck into his boots. He also wears a utility belt and his signature wrap scarf at all times. He hides a pair of bright yellow goggles underneath his scarf for when he needs to use them in battle. Before starting his teaching career, Shota's goggles were of a silver-like color, and he had a smaller utility belt. During his second and third years of high school at U.A., Shota's hero outfit was a separate black jacket and pants, as opposed to his current outfit, which resembles more like a unitard. He also sported a pair of fingerless gloves. In his second year, Shota added goggles to his costume. His goggles in his third year resemble more like the ones he wears today. After being heavily injured by Nomu, Shota's entire face and both of his arms were completely covered in bandages. Once these bandages were removed, Shota reveals a deep scar underneath his right eye. His formal attire for press meetings and meetings with parents of his students includes a black suit, blue tie, and white dress shirt. While in this attire, his hair is well-groomed and held back in a low bun at the base of his neck. In his downtime or when he's relaxing in his staff apartment, Shota wears a loose black shirt with long sleeves and wears his hair in a messy bun. During the fight against Tomura Shigaraki, Shota had to cut his right leg off to prevent the Quirk-Destroying Drug from destroying his Quirk. In the aftermath of the battle, Shota now has a second scar on his eye stretching from his eyebrow to his lower eyelid, as well an eyepatch covering his right eye entirely, due to the damage received from Tomura. He also now possesses a prosthetic right leg. Shota is a very stern and mostly reserved man who has lofty expectations of his students. He is primarily moved by logic and does not believe in the necessity to maintain a clean-cut appearance or filter his words or ideas for others. He often comes off as cold, apathetic, and impatient, exerting very little energy in most situations, preferring to take naps in his sleeping bag instead. As a teacher with notoriously high expectations, Shota is known to expel students who he feels are not suited for U.A. High. However, it's revealed that this high expulsion rate is only on paper and that he actually re-enrolls the students he expels: Shota does this so they can experience "death" once, giving them an experience that drives them to push even higher. Although it is noteworthy that he has not expelled any students from Class 1-A yet despite being well-known for doing so. He can be rigid and strict when necessary and has little tolerance for disobedient behavior. Shota is not afraid of putting his students through rigorous training and often pushes the more unpleasant parts of Heroism so that his students can overcome their limits. Shota has proven to be very vocal and unafraid when expressing his ideas. He has mentioned on several occasions that some of U.A.'s choices when it comes to examinations are not practical or challenging enough for real Hero hopefuls and is adamant about having certain systems used by the institution changed. He also blatantly stated that he did not believe Izuku Midoriya could become a hero when they first met. He is also known for lying to his students in order to manipulate them into giving their best, a technique he describes as a 'logical ruse'/'rational deception'. Despite his apathetic traits, Shota genuinely cares about his students and will go to great lengths to protect them as he saved Tsuyu Asui from Tomura Shigaraki, in spite of his grievous injuries. He has also expressed belief in his students on multiple occasions and is confident that even the likes of Katsuki Bakugo would not be swayed by villains. Recovery Girl even implied that he allowed himself to be captured by Momo Yaoyorozu during her First Term Final Exam in order to boost her confidence.[14] Shota is also quite nurturing, as he has been seen attending to his duties as Eri's guardian and foster father without complaint. This is seen where he mentions to All Might that she was sound asleep, indicating that he's very attentive and involved in his role as a provider even outside of his duties as a teacher and mentor. He is shown to be extremely disturbed upon discovering the ultimate fate of his friend Oboro Shirakumo. He displayed intense grief upon confronting Kurogiri after discovering that he was once Oboro, showing that Shota has not yet come to terms with his friend's fate. Furthered by this tragedy, Shota is shown to be particularly wrathful towards individuals who are unfortunate enough to provoke him, especially by harming those he cares about. This was seen when Shota strangled Kyudai Garaki after learning of the desecration of Oboro's corpse, blocking Kyudai's longevity Quirk, tormenting and humiliating the aged scientist in a show of sheer rage. Despite his personality, Shota has shown on several occasions that he is not completely devoid of joy or humor: he often grins whenever he is impressed by one of his students or after he tricks them with one of his 'rational deceptions'.