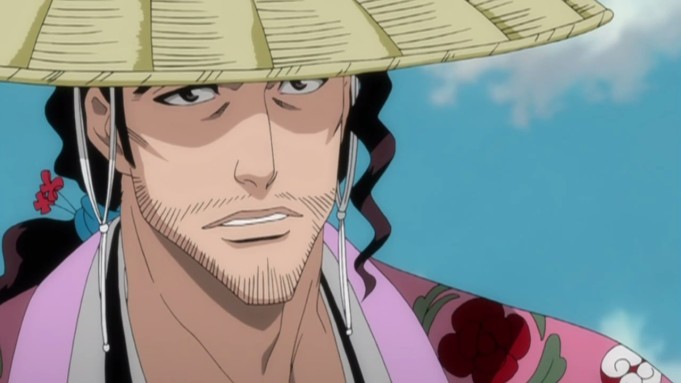 Shunsui Sakuranosuke Jirō Kyōraku is the captain of the 1st Division and Captain-Commander of the Gotei 13. His lieutenants are his niece, Nanao Ise, and Genshirō Okikiba. He is the former captain of the 8th Division. Kyoraku is a laid back and flamboyant man, evident in his style of dress and general attitude. He wears a straw hat and a pink flowered haori over his captain's uniform. Although his haori and obi sash are cheap, his pinwheel hairpin is very expensive. In his off time, he can be seen drinking sake and napping. Other times, he likes to chase after women, which is noted by Yasochika Iemura of the 4th Squad when commenting in his diary. In particular, he often flirts with his lieutenant, Nanao Ise, whom he calls "my Nanao-chan" (little Nanao). In one of the omake outtakes he told Rangiku Matsumoto to buy Nanao Ise a sexy outfit while in the human world. Matsumoto brings back a skimpy two piece bathing suit which Nanao refuses to try on. He is close friends with 13th Division Captain Jushiro Ukitake, with whom he graduated from the shinigami academy and works with often. Kyoraku tends to use a more familiar speech style than most other characters in Bleach. He generally refers to his fellow captains and shinigami by their first name followed by an honorific, and is the only character who dispenses with honorifics when addressing General Yamamoto, calling him old Yama (Yama-jī). Even Ukitake, who was also taught by Yamamoto, does not do this. Kyoraku is a peace-loving man who will always try to talk his way out of a fight. However, he does not wish to insult his opponents by not fighting, either, as he explains to Chad. Since he has achieved the rank of captain, it is implied that he must be a powerful fighter, but the true extent of his abilities has not been seen in the series. General Yamamoto states that Kyoraku and Jushiro Ukitake, both of whom he trained himself, possess "greater powers on the battlefield than any younger generation, or old," suggesting that the two are more powerful than any other captains, with the possible exception of Yamamoto himself. The slightly eccentric Kyoraku also seems to like making an impression on opponents. In the Soul Society arc, when Kyoraku confronts Chad who had invaded the 8th division area, he has Nanao Ise scatter rose petals over him to make a dramatic entrance. It creates this effect at first, but when Nanao doesn't stop dropping the petals and Kyoraku begins to exhort her to stop in an embarrassing manner, she dumps the whole basket on him, burying him and ruining his entrance.