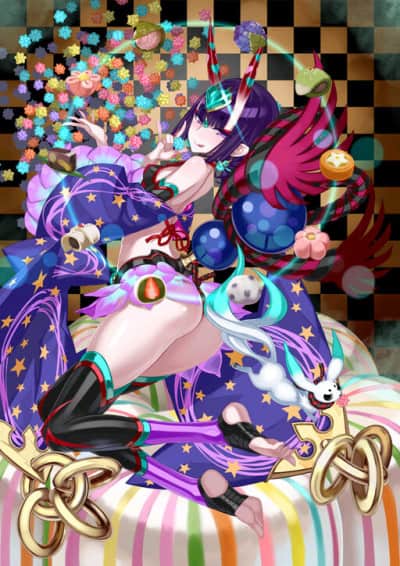 Shuten-douji, Class Name Assassin, is an Assassin-class Servant summoned by Ritsuka Fujimaru in the Grand Orders of Fate/Grand Order. Shuten-douji is a rather short Servant. Her skin is pale tinged with light purple, almost resembling silver. Her hair is purple and short, reaching only her neck and her bangs cut past her forehead. Her eyes are lustrous purple, with red makeup painted right above them. Unlike Ibaraki-douji's horns, Shuten-douji's do not protrude out of her forehead, but rather appear to flow out of her body naturally, going from the same pale tone of her skin and gradually becoming wine-red. Her fangs are sharp and long compared to those of humans. Shuten-douji wears a golden ornament with a green jewel over her forehead, in between her horns. She wears an extremely long kimono without sash, leaving it open and exposing the body underneath. The kimono is bluish-purple, with red curved lines drawn throughout it, especially on the tri-parted extensions of the sleeves. Some green ribbons are attached to it. Underneath the open kimono, Shuten-douji is mostly naked. Her ankles have red ribbons tied around them. She wears a piece of seemingly metallic material that covers her crotch and breasts, linked together by thin lines, and going all the way up to her neck, connecting into a choker. Of the same material, her hands and feet wear small pieces, tied around her fingers and wrists, and toes and heels respectively. She is seen carrying three gourds by her waist and over the hip: the first is a small brown gourd; the second is a white container of sake; the third and most prominent, is a overly large blue gourd of glass with golden ornaments, from which she unleashes a purple burst of liquid when attacking, suggesting it to be carrying poison. In addition, she holds a cup of sake in her right hand, while the left holds a much wider cup, with a vine of black grapes, multiple pink peaches, and shide (zig-zagged paper strips). In her second Ascension, the kimono is shortened up to her waist, but is tied by a wine-red sash, and now wears metallic shin guards, with ornamental oni heads on her knees. In her third Ascension, the sake cups are replaced by a red paper lantern with the kanji for "drunk" or "poisoned" written on it in black in her left hand, while the right holds a double-edged (might be triple or quadruple) sword, with a glassy-blue mid-section, a large golden guard and hilt, with an ornament resembling her blue gourd attached to the bottom of the hilt. Under the moonlight, a man-eating flower is glamorously in full bloom while stealing away the eyes of the people watching. A demon wearing a girl’s form, narrowing her eyes while licking her lips seductively. It may not be known that although her outward appearance properly resembles a human girl, Shuten-douji is not a human being. Even though she seems to communicate with words like a human being, she is essentially a different being. Her preferences are similar to a human’s, but for her to love something is but a theory, from the idea that if she suddenly put her hand on the things she loves, it would not be understood by humans as love. Although she knows love, requests love, and embraces love, it is impossible to overlap that love with the right people. Her love is accompanied with blood; her love spreads death; her love tears one’s heart. Her impulse hidden under her white naked body is surely rising and swelling, being distorted, and rolling around. Therefore, she is a demon. Shuten-douji doesn’t talk about her wish for the Holy Grail. Just like how she was when she was alive, going wherever her fancy takes her, she thinks and behaves as she pleases, not being any different in the present days nor in the bygone days. Also, she is a collector of antiques and rarities, even having a keen interest in the Red Dragon Ulna dwelling on Kintoki’s arm. She appears to attach an importance on rarity and on the elegance of their appearances regarding those items, so she is incompatible with the King of Heroes who attaches an importance on the items’ history and performance. Regarding the Providential Oni Poison Sake, Shuten-douji regards it as her wine. It is something for her alone. At first, it was something brought by General Raikou, but it is her's now. Shuten had thought that it was fine drinking this, even if she died, but having a wine without blood and the moon and its silver is unthinkable to her. Shuten likes this wine, citing it as a very sweet drink, as the essence of sweetness. She describes it having a trembling, hot taste, as if that of a melting taste, and if there is a pinch of blue eyes reflecting the moonlight, then there is nothing else that she would want.