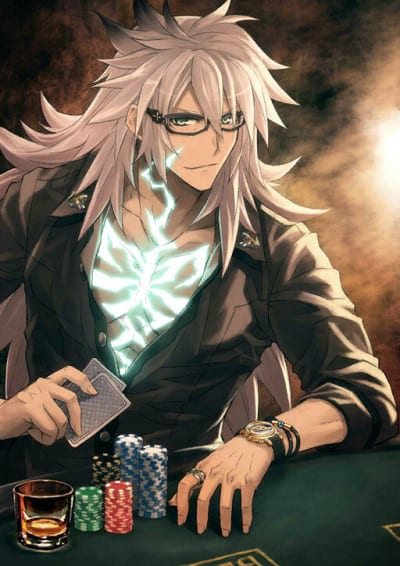 Siegfried, Class Name Saber of "Black", is the Saber-class Servant of Gordes Musik Yggdmillennia of the Black Faction in the Great Holy Grail War of Fate/Apocrypha. He is one of the Servants summoned by Ritsuka Fujimaru in the Grand Orders of Fate/Grand Order. Siegfried is a tall man with silver-grey hair. His body was encased in radiant silver woven plate armor. He carries his Phantasmal Greatsword, Balmung, on his back. His exposing skin was dyed brown with the blood of a dragon. That skin was composed of dragon scales that wouldn't be wounded by any blade or spell... All except for a single part in the middle of his back. His tall stature, slender body and tanned-colored skin are proof of him having been soaked in the blood of a dragon. Having turned into a Heroic Spirit, Siegfried looks back at his lifetime to his self as a "hero wished by others" and harbors a modest dream. Siegfried is known for the tales of his royalty and the way he led troops as a captain, but he was also a hero who answered the requests and calls of others. However, this selflessness opened a void in his heart. The more he helped others, the more confused he was about his own wish. Even though he loved humans and the world, he never managed to fill that emptiness no matter what he did. At his moment of death, he finally realized that in his next life, he wanted to fight not for "somebody else's sake" and other people, nor for himself, but only for the justice he himself believes; he wanted to be a true Hero of Justice. That is his dream. He had always made the wrong decisions at the most critical of moments. Bound to his own desires, he tried to overlook the weak who cowered before him. He did not seek salvation for himself, so he ignored the silent cries of those who had. Such meanness and wickedness were certainly not things he had striven for. Siegfried as he was portrayed in the "Nibelungenlied" forms the basic essentials of his character, and he only knows about the Norse Valkyries from second-hand knowledge. If he is summoned as a Servant, Siegfried will think of himself about how he is told of as a hero that killed a dragon, but in the end, the only thing he did was give birth to further tragedy. An absolute retribution, as if it was saying that "since you shed so much blood until now, you will also shed the blood of the people you protected." For this reason, his self-esteem is always negative, and he is constantly murmuring, "I'm sorry." In the Great Holy Grail War, Siegfried obeys his strict Master, even if he is forced to unwillingly shackle himself and is forbidden to speak by necessity because no command will burden him if it leads to fulfilling his own wish that he couldn't fulfill during his lifetime. His personality is truly that of a noble knight, but it is unknown what he really thinks because of the command to never speak a word. Just as the impression of his face gives off, he is reticent and modest, but his bearing, which overflows with dignity, makes him seem well-bred. He is the type to talk with a simple, unsophisticated tone and hold back his words to the absolute minimum needed. That is the foundation of his personality, and it deepened the antagonism between him and his Master Gordes. Although taciturn, his passions run deep. Siegfried has a reserved attitude, but as a matter of fact, there is a side to him more stubborn than anyone else regarding his own personal principles that is demonstrated even to his own Master. Although he will normally listen to anything said no matter what it is, he has this one line of thought where he will not retreat even one step back even when a Command Spell is used. Because of that, there seems to be an occasional misunderstanding. Siegfried's self-esteem tends to be negative because of the misfortune caused by the Rhinegold that continues to last, with him being unable to do anything but grant the wishes of anyone that crosses over into his lifetime, and it seems that his reason that once stirred the flow of his thoughts could not be found. It is possible to say that he is extremely easy to handle as a Servant, Siegfried being able to make a Master that has a nature to retreat a single step in dangerous situations to stand up to the situation presented. However, as mentioned above, in situations where he is left to problems that will affect his principles, no matter how much a favorable relationship is built between himself and his Master, it seems he will stubbornly not listen to anything said by the Master. However, his principles are extremely humane and respectable, and if he has a good-willed Master, it is expected for one to be able to build up a relationship of mutual trust with him without any troubles to an extent. However, no matter how much the relationship of mutual trust is built up, it is hard for one to ride on the relationship through flattery.