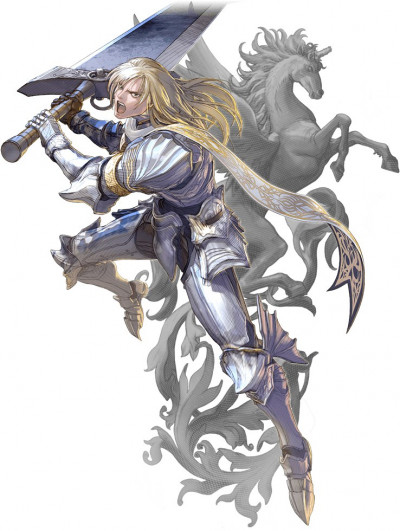 In his debut, Siegfried appeared as a young German man with short blond hair and blue eyes, covered in simple knight armor. Following his redemption, Soulcalibur and beyond, he retains the armor but his hair has grown longer, past shoulder length. During Soulcalibur he gains a long scar dashing over his right eye, which he likely gained fighting against Inferno in the original Soul Edge. Soulcalibur III, he returns with armor bearing the motif of a phoenix as well as feathers on his pauldrons. As of Soulcalibur IV, his armor remains the same, but a second layer of crystalline armor covers with a rather intricate design and wields Soul Calibur instead of Requiem. He also gains a long blue scarf as well, completing the 'knight in shining armor' visage. His weapon in Soul Edge was originally Faust, a simple zweihander with a basic design, but swapped it for Requiem, a large blade with a flat end and a black lining in the center. He continues to use this sword from Soulcalibur all the way to Soulcalibur III and resumes its use in Soulcalibur V. In Soulcalibur V, Siegfried's appearance begins to take on the traits of his father, and has grown a stubble. His hair is swept up with a couple bangs hanging down and his scar still remains. In trailers of Soulcalibur: Lost Swords he wore armor almost identical to his Soulcalibur V counterpart, albeit with blue coloring, but in-game he starts off in his underwear. His appearance changes depending on what equipment the player gives him. In Soulcalibur VI, he is depicted in his youth once more, but wears armor identical to Nightmare's with a white color scheme and sporting a scarf, further emphasizing his polarity with his dark side's dark blue armor and tattered cape. The right side of his armor features tinges of blue, referencing the lingering remnants of Nightmare within and underneath his armor reveals bandages on his right arm which features some notable discoloration as a result of his arm recovering from drastic transformation triggered by Soul Edge. The E3 Story trailer also depicts his Soul Edge appearance, wearing similar armor and lacking the scarf.