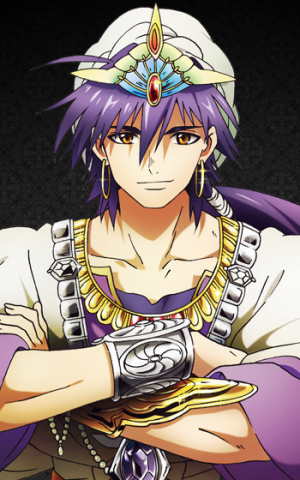 Sinbad is the former King of Sindria, the World Innovator, the Head of the International Alliance, as well as the president of the world's most powerful trading company, the Sindria Trading Company. He is a Dungeon Capturer and a King Vessel. He was also the leader of the Seven Seas Alliance. Sinbad has halfway "fallen into depravity", as noted by Ithnan. Though it was originally thought that Sinbad was the reincarnation David Jehoahaz Abraham, Sinbad has stated that he is not . However, David did resonate with the black Rukh inside of Sinbad after the summit ended. Sinbad is often accompanied by members of the Eight Generals, who are his most trusted companions. He is a major character in Magi and main character of Adventure of Sinbad. Sinbad is a tall, attractive man with tan skin and a muscular build. He has golden eyes and very long, purple hair tied in a ponytail. He wears floor-length purple and white robes, a white turban with feather decorations, and pointed red shoes. Sinbad also wears a lot of jewelry, most of which are actually the Metal Vessels (bangle, necklace, ring, etc.) he has collected over his years of dungeon conquering, though he has had his hoop earrings since childhood. Sinbad also has a long, thin ahoge that sticks straight up. He carries himself confidently and usually has an easy smile on his face. When he was young, he used a scimitar as a weapon. Sinbad is a very laidback and fun-loving person. He can be quite a flirt and is not above using his charm to get what he wants. He has flirted with female characters, including, but not limited to, Kougyoku, Mira Dianus Artemina, Morgiana, and many others. When drunk, Sinbad's flirtations with women are indiscriminate. This is common enough that when he is accused of taking advantage of Kougyoku, Ja'far and the others instantly take her side. Sinbad admits that “[such things have] happened before...” Despite all this, he can be serious when needed and is a great and honorable king who is respected by everyone he meets, especially his subjects (whom he seems to consider a sort of extended family). When he is young, his mother describes him as being an energetic, sensitive boy who cherishes his friends and family. He selflessly uses the money from conquering Baal to purchase boats for the citizens of Contastia Harbor. By the time he is an adult, he has lost much of that innocence. He initially appears to be selfless and devoted, doing altruistic deeds for other people without asking for anything in return. One example of this is in Balbadd, when he allows a starving mother and the band of desperate people with her to raid the mansion he was supposed to guard on the condition that they do not hurt anyone. However, it is later revealed that he helped Alibaba Saluja, Aladdin, and Hakuryuu Ren because they were potential allies in the battle against Al-Thamen. After talking with Ja'far, he realizes that he has become sly and manipulative, traits that he'd hated when he was young. Due to being able to foresee the flow of destiny, Sinbad is quite arrogant, believing himself to be exceptional compared to other people. As a result, he looks down upon other people. He holds the same view even for his trusted eight generals. As stated by Hakuryuu Ren, Sinbad considers those generals to be smaller and weaker than him, despite Sinbad claims that he believes in them.