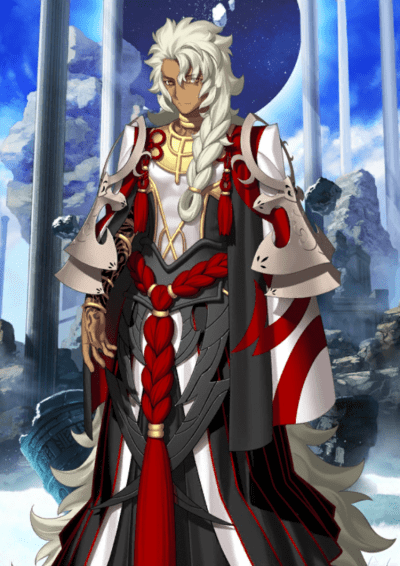 Solomon, Class Name Caster, is a Caster-class Servant summoned by Marisbury Animusphere in the first summoning ritual performed by Chaldea Security Organization, participating in the First Fuyuki Holy Grail War of the Fate/Grand Order timeline. He qualifies for the position of Grand Caster. Introverted, self-assured and passive. A laid-back king, without a hint of seriousness. The gist of his personality is “self-assured”, but this is simply the power to “not read the mood”. Thus, he is merely making statements on a self-assured manner, and his nature is that of a chicken. Although serious, he is not earnest and is constantly living at 80% power. He properly ascertained people, properly established laws and properly governed the country. Despite lacking in vigor, he was loved and respected by the masses as a wise, gentle king who was full of love. Yet, none of those traits came from Solomon’s own will. Having been ordained as a king from the moment he was born, Solomon had no choice but to hear the voice of God and act accordingly. His psyche is dispassionate and (having been deprived of the freedom to sympathize with the joys and sorrows of people) inhuman. A gentle king that gives off a relaxed sense. "Confidence" is his main characteristic, but it is actually only his ability of being "unable to read the mood." As a result, he only makes statements in a confident manner, but is actually a coward (chicken) in his basic nature. Diligent but not earnest, he lives by putting only 80% of his maximum effort. He properly ascertained of the people, properly established the law, and properly governed the country. Although he is somewhat lacking in mettle, he is a wise and kind king, full of love, respected and beloved by his people. However, all of those traits are not actually by Solomon's own will. From his birth, he had been ordained to be a king, to hear the voice of God and to live in accordance to it. There is no emotion within him; he is inhuman, deprived of the autonomy to sympathize with the joy and sorrow of the people. It is only when he becomes Romani Archaman that he finally acquires his original human nature. His root is that of a pessimist and realist. Even though he speaks of wishful thinking as a mood maker, due to himself unable to think of that as more than pipe dreams, he is quite shameless in some respects. He loves humans, but because he's a coward in nature who "does not want to see sad things", he ends up limiting himself with superficial relationships. On the other hand, he is capable of being good terms with pretty much everybody. Your typical affable friendly guy. When being faced with a dilemma, he has the bad habit of choosing to stay undecided and devoting himself to just observe, or just straight up runs away, so that the status quo is maintained. Due to Roman himself reflecting on that weakness of his, it only needs a few words, for someone in his surroundings to simply say "hang in there", for him to somehow hold his ground and display a resolution worthy of the King of Magecraft. Incidentally, any Servants would end up having "I don't know the reason but this guy's the one at fault here" as their first impression for Roman; and due to that they will unconsciously complain about him. The only ones who don't judge him negatively are those who aren't Servants, the contrarians, and the Berserkers that don't perceive evil as evil.